Astronomers have released a spooky image of “dancing ghosts,” emanating from a pair of distant radio galaxies — the latest surprise discovery from a massive survey expected to map 70 million galaxies.

These electromagnetic waves aren’t visible to the naked eye (which is why you can’t see radio broadcasts on Earth), so we can’t detect radio galaxies using optical telescopes — we have to use special radio telescopes.

The Australian Square Kilometer Array Pathfinder (ASKAP) is one of the biggest and most sensitive radio telescope arrays, and it’s currently being used to study the entire southern sky as part of the Evolutionary Map of the Universe (EMU) survey.

Dancing ghosts: The ASKAP team is now publishing the first discoveries from the survey, and the stunning “dancing ghosts” image is among them.

“Jets of electrons … are then bent into grotesque shapes by an intergalactic wind.”

“When we first saw the ‘dancing ghosts’ we had no idea what they were,” astrophysicist Ray Norris of Western Sydney University said in a news release.

More questions: The researchers might have figured out what they are seeing from these radio galaxies, but they still aren’t sure why they’re seeing it.

“[W]here does the intergalactic wind come from?” Norris asked. “Why is it so tangled? And what is causing the streams of radio emission?”

“We still don’t understand the details of what is going on here,” he continued, “and it will probably take many more observations and modelling before we do.”

Why it matters: Most observations of the universe have been conducted using optical telescopes, but now that astronomers can survey the sky with powerful radio telescopes, a wealth of new information is appearing before their eyes.

So, these radio galaxies’ “dancing ghosts” might be one of the first notable discoveries from the EMU survey, but we can expect many more to come.

“We are getting used to surprises as we scan the skies as part of the EMU Project, and probe deeper into the universe than any previous telescope,” Norris said. “When you boldly go where no telescope has gone before, you are likely to make new discoveries.” 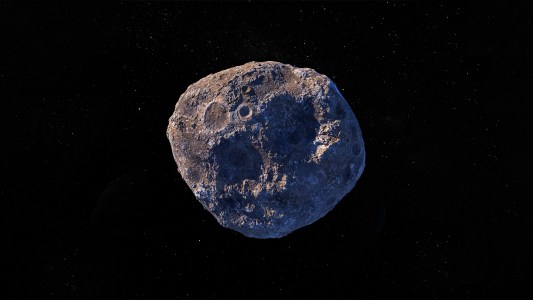 The first high-res heat emissions map of the Psyche asteroid suggests the hunk of metal might not be the core of a developing planet.

Asteroids
Psyche asteroid might not be a planetary core after all
By Kristin Houser
Subscribe to Freethink for more great stories
Subscription Center
Sections
Video
Freethink
Subscribe
We focus on solutions: the smartest people, the biggest ideas, and the most ground breaking technology shaping our future.
Subscribe