Australia is on the brink of sending its first rocket into space — and it has a hybrid rocket engine unlike any that’s ever launched before.

The challenge: Being able to send payloads into space opens up new opportunities in scientific research, manufacturing, communications, and more. In the near future, it could also be vital to national security, as more countries are looking to space as the next military frontier.

But so far, only 11 nations have managed to reach space on their own — the rest have had to rely on other nations’ rockets, which means not only paying for the privilege, but also abiding by their partners’ rules and schedules.

Hybrid rocket engines are expected to be safer, simpler, and cheaper than solid- or liquid-propellant engines.

“We are now ready to go on and complete the vehicle and go for a launch attempt next year,” Adam Gilmour, the company’s co-founder, told ABC News.

The rocket engine: In most rocket engines, fuel and a source of oxygen (called an “oxidizer”) are combined in a combustion chamber and then ignited. This generates an exhaust that is directed out a nozzle to produce the thrust needed to break free of Earth’s gravity.

In these rocket engines, the fuel and the oxidizer have always been the same state of matter — that is, both solids or both liquids — but Sirius is a hybrid rocket engine, with a solid fuel and a liquid oxidizer.

Due to their design, hybrid rocket engines are expected to be safer, simpler, and cheaper than all solid or all liquid propellant engines — but despite decades of research, they’ve fallen short of other types of engines in terms of performance.

Gilmour Space appears to have overcome this shortcoming with Sirius, thanks in part to a proprietary solid fuel — the rocket engine generated 115 kilonewtons of thrust during its final qualification test, which, as Gilmour told New Scientist, is enough to lift three or four SUVs.

Tempered expectation: Gilmour Space plans to put five Sirius engines on its in-development Eris rocket, and a back-of-a-napkin calculation suggests that will generate more than enough thrust to get the rocket, fuel, and its first payload, a small satellite, off the ground.

Gilmour won’t be surprised if the test launch, expected to take place in April 2023, ends in failure, though.

“We’re confident it will take off the pad, but no first launch vehicle from a new company has ever successfully gone to space on the first try,” he told New Scientist. “What generally happens is the second one works, so we’re building two of them so we can learn from the first and succeed with the second.”

Looking ahead: Once Gilmour Space is confident in Eris’ ability to reach space, it plans to develop a larger rocket capable of lifting a payload of about 2,200 pounds into low-earth orbit (Eris’s payload capability maxes out at 672 pounds).

This should be enough to earn the company some cash launching satellites for customers, including the Australian government, which could help support its longer-term goal.

“We do plan on sending humans to space, but that’s approximately 10 years away on our technology roadmap,” Gilmour told ABC News. “But we have got to go step by step.’” 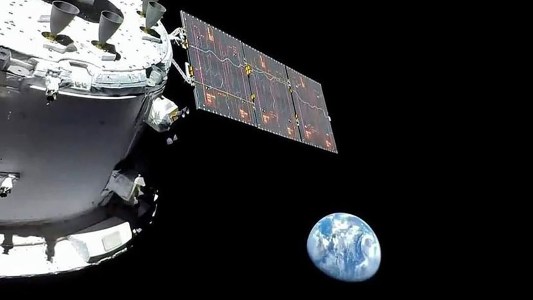 NASA has shared the first images from its Orion spacecraft, which is expected to do a lunar flyby on November 21.