The surface of the moon has been mapped — but the world below it is still largely a mystery.

Based on satellite data, scientists suspect that the moon is riddled with subterranean tunnels and caves, which could be ideal settings for future lunar colonies.

Because they’re underground, the formations would shield astronauts from the space radiation, meteorites, temperature fluctuations, and other elements that make the surface less than hospitable. They might even provide access to icy water.

However, none of the robots we’ve sent to the moon have been able to directly explore lunar caves — the terrain is simply too rough — so the European Space Agency (ESA) is developing one that could.

A Bot to Explore Lunar Caves

In 2019, the ESA requested proposals for systems to detect, map and explore lunar caves.

The following year, it narrowed the list of submissions down to five to study in further detail — and one of them centered on a robot that looks more like a hamster ball than your standard space rover.

This spherical robot is Daedalus (“Descent and Exploration in Deep Autonomy of Lunar Underground Structures”), and it was designed by an international team, led by University of Würzburg professor Andreas Nüchter.

The robot is 18 inches wide, and inside its transparent outer shell is a system of cameras, sensors, and other instruments it could use to explore lunar caves.

The rolling robot might finally reveal what’s going on beneath the moon’s surface.

The plan would be to lower the robot into a cave on a long tether.

It could then disconnect itself and roll away to collect data on the area, using its extendable arms to move obstacles and test the properties of rocks.

The tether, meanwhile, would act as a WiFi receiver that Daedalus could use to relay the data it collects back to the surface.

A Daedalus prototype has already been built, and the researchers are taking part in a new ESA study exploring potential ways to integrate the robot into one of two existing lunar initiatives.

There’s still no guarantee that Daedalus will ever get a chance to explore lunar caves.

If it does, though, the rolling robot might let scientists finally see what’s going on beneath the moon’s surface — and maybe even identify the perfect location for the first lunar colony. 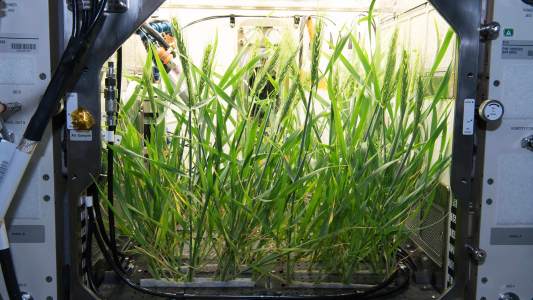 A brand new species of bacteria has been discovered on the International Space Station — and it could one day help astronauts grow plants on Mars.