TIME Studios is co-producing a new virtual reality series filmed by astronauts aboard the International Space Station (ISS) — and in the next episode, viewers will get a chance to experience a VR spacewalk.

The challenge: Fewer than 600 people have ever been to space, and while space tourism is finally becoming “a thing,” chances are the high cost will keep most of us from ever booking a ticket.

That’s a shame because seeing Earth from space is said to have a profoundly positive impact on people, due to something called the “overview effect.”

The VR spacewalk: Soon, you may be able to experience the overview effect without leaving your living room.

In 2019, TIME Studios teamed up with Canadian film production company Felix & Paul Studios and NASA to produce Space Explorers: The ISS Experience, a four-part VR series made using 200 hours of footage recorded by astronauts aboard the ISS.

Astronauts then attached this camera to a robotic arm that can extend 50 feet away from the ISS, and during the series’ next episode, footage from that camera will be used to let people experience a VR spacewalk.

“An immersive series titled ‘The ISS Experience’ would not be complete without taking viewers along for the ultimate ride: a spacewalk outside the International Space Station side by side with two real astronauts,” Félix Lajeunesse, co-founder of Felix & Paul Studios, said in a press release.

Strap in: The first two episodes of The ISS Experience have already been released — they focus on the arrival of astronauts to the station and the experience of being a woman in space.

The VR spacewalk episode will be the third, and it’s expected to arrive in the fall of 2021, with the fourth and final episode following in the winter. The episodes can all be watched in VR using the Oculus Quest and Rift headsets, or in 360-mobile format via a 5G mobile carrier. 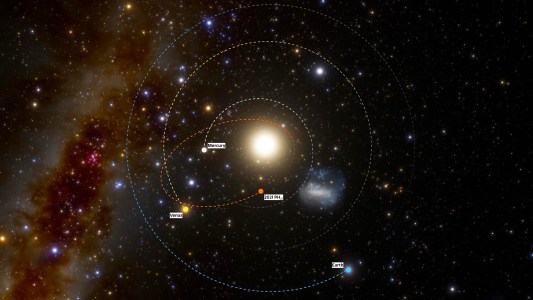 Astronomers have discovered an asteroid that orbits the sun in just 113 days, making it the fastest-orbiting asteroid in our solar system.