Five years ago, a group of computer scientists, roboticists, and researchers across Europe set out to develop an artificially intelligent (AI) robot that could safely work alongside humans, anticipating their needs and providing a strong pair of extra hands.

That project, appropriately dubbed “SecondHands,” wrapped up on May 4 — and the remarkable AI robot that resulted from it foreshadows a future where collaborative robots (cobots) work alongside us.

In 2018, the team behind the European Union-funded SecondHands project announced the creation of ARMAR-6, a humanoid cobot prototype, measuring more than 6 feet tall and equipped with a bevy of sensors, cameras, and advanced software algorithms.

The group then spent the next two years testing and refining the AI robot at a fulfillment center for the U.K.-based online supermarket Ocado.

There, ARMAR-6 worked alongside the company’s employees, including maintenance worker Thomas Roszak.

The robot can respond to direct commands and make inferences about a worker’s needs.

“I grew up on movies like ‘The Terminator,’ so when I saw that robot, I was actually impressed with what it looked like,” Roszak told the BBC. “You can actually imagine it looks like a man.”

The robot’s strength proved to be a major help to Roszak on the job.

He described to the BBC how the cobot would hold a heavy plate in place for him so he could undo its bolts — an easy task for ARMAR-6 that would’ve left human arms shaking after a couple of minutes.

Not only can the robot respond to direct commands — “Bring me the water bottle” — it can also make inferences about a worker’s needs. For example, if a person says, “We need to clean the drive train,” the robot can understand what that entails and respond by bringing the spray bottle.

“The key point about the whole thing was that we will have a robot system that could kind of watch what the maintenance technicians were doing, understand what activity they were engaged in, and then proactively offer the appropriate assistance at the right point in time,” Graham Deacon, robotics research fellow at Ocado Technology, told the BBC.

Developing a useful robot coworker wasn’t as important as developing a safe one, though — no one is going to want to work alongside a cobot if it means putting their life at risk.

To that end, the researchers gave their AI robot a cutting-edge vision system with five cameras that allows it to recognize any humans in the vicinity.

“ARMAR-6 has the ability to detect where humans are and to estimate their 3D pose just from images without the need for the humans to wear any markers,” researcher Lourdes Agapito, a professor of computer vision at University College London, said in a demonstration video.

The researchers also designed the robot’s arms to immediately stop moving if they sense a collision with a human body.

Now that the SecondHands project has wrapped up, the team is looking ahead to a day when an AI robot like ARMAR-6 could actually start working alongside humans.

“The results of this project have shown categorically how robots can amplify the benefits of human expertise,” Deacon told the BBC. “We’ll continue to build on these learnings, looking forward to a future where we can use these breakthroughs to apply them to a real world setting.” 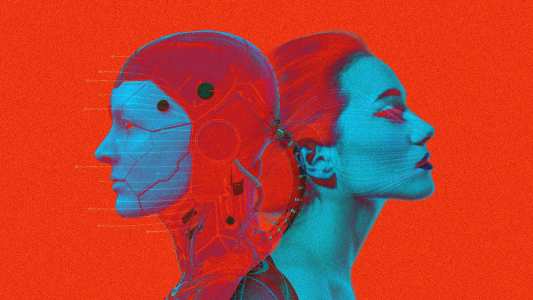 Deep learning AI is becoming more complex, capable, and impenetrable, but these scientists are attempting to break the black box.

AI
Can humans figure out how deep learning AI thinks?
Subscribe to Freethink for more great stories
Subscription Center
Challenges
Video
Freethink
Subscribe
We focus on solutions: the smartest people, the biggest ideas, and the most ground breaking technology shaping our future.
Subscribe