Researchers in Korea have made a robot that looks just like a chameleon — if you can spot it. It has a waddling gait, googly eyes, and the ability to change color to match its surroundings — the iconic chameleon trait.

The cute chameleon-like robot may seem like a gimmick, but it is a precursor to future active camouflage technology.

Why this matters: The military is constantly trying to blend in. But the iconic camo fatigues don’t work in every environment, and soldiers’ can’t pack for every occasion. Active camouflage or a color-changing uniform could be a solution (at least for special operations).

In civilian fashion, instead of blending in, trendy camouflage has made designer threads stand out — and a color-changing gown could undoubtedly turn heads. It would be a step up from the University of Florida’s electronic color-changing fabric. New designs employing active camouflage could flash, changing colors based on the background.

The robot’s fake electronic skin automatically alters its hues to fit the backdrop.

What the bot! The chameleon robot was designed by a team of researchers at Seoul National University in South Korea. Led by mechanical engineer Seung Hwan Ko, they created one of the first bots to change color in response to its surroundings and published their work in Nature Communications.

Not only does it change color, it can also adapt its pattern to one of three pre-programmed designs: stripes, dots, or curlicues. Even though there are only a few pre-programmed patterns, they can be close enough to blend in with its surroundings.

“It is not necessary to match the background perfectly,” Sukjoon Hong, a mechanical engineer at Hanyang University, told Smithsonian, “because as [long] as it is complex enough, then we can get sufficient amount of [camouflage].”

How it works: Chameleons pull off their iconic trick by changing their iridophores — a unique layer of cells beneath the skin — to blend in with their environment. The robot’s color changing abilities are also beneath the skin layer.

The simple-looking robot is quite complex. A thin coat of liquid crystal ink, which can adopt any color by shifting the arrangement of its molecules, creates the robot’s color-changing skin. If the molecules arrange in a large pattern, the skin turns red. A small pattern reflects blue.

“This chameleon skin, the surface, basically is a kind of display,” thermal engineer Seung Hong Ko told MIT Technology Review. “It can be used for a soft or stretchable or flexible display.”

The liquid crystals change orientation in response to temperature. Sensors on the robot’s belly tell the bot’s brain (control unit) what color it is strolling across. Then that triggers the heat strips under the chameleon’s skin. Heat the robot to the right temperature, and the liquid crystals align to reflect the desired color.

The future: Currently military camouflage doesn’t change with the environment. A soldier might be hidden in a forest of green, but will stand out against a snowy mountain. But this chameleon-like technology, on the other hand, adapts to the environment, providing soldiers a sense of stealth and a tactical edge. 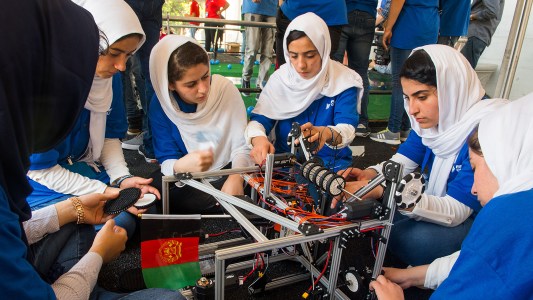 A human rights lawyer is trying to get the Afghan girls robotics team evacuated to Canada so its members can avoid living under Taliban rule.

Female Leaders
The plea to save the Afghan girls robotics team from the Taliban
Subscribe to Freethink for more great stories
Subscription Center
Challenges
Video
Freethink
Subscribe
We focus on solutions: the smartest people, the biggest ideas, and the most ground breaking technology shaping our future.
Subscribe