Facebook thinks the future of human-computer interactions may be all in the wrist.

At Facebook Reality Labs (FRL), researchers are developing a neural wristband that allows wearers to control their augmented reality (AR) devices simply by moving their fingers.

The tech is still in the early stages of development, but if brought to fruition, it could forever change the way we interact with our AR devices — and the world around us.

Unlike virtual reality headsets, which completely replace the real world with a digital one, AR glasses project a digital layer onto the real world — the wearer still sees everything around them, but they also see computer-generated information.

The applications for AR are wide-ranging — pedestrians can use the tech to project directions onto the real world, while doctors can see surgical guides right on patients’ bodies.

AR controller options, however, are less plentiful. Someone using AR glasses to get directions, for example, usually needs to either enter their destination into a connected device, such as a smartphone, or issue a voice command.

The former option means the user still has to look at a traditional screen at some point, while the latter isn’t ideal if the AR system is being used in public, the office, or anywhere else people might not want or be able to talk aloud to their tech.

Facebook’s neural wristband could do the job instead.

When you make the decision to move a finger, your brain sends an electrical signal to your hand — that signal is what instructs your finger to move exactly how you want it to.

Facebook’s neural wristband contains sensors that detect those electrical signals. It then translates them into commands for AR glasses.

In the future, the neural wristband might be able to sense the user’s intention to move.

Pinching your index finger and thumb together might “click” on the AR display, for example. If wearing a neural wristband on each arm, a person could make the motions of typing on a keyboard and have their text appear on the AR screen.

“This is about decoding (the) signals at the wrist — the actions you’ve already decided to perform — and translating them into digital commands for your device,” Facebook explained in a blog post.

“It’s a much faster way to act on the instructions that you already send to your device when you tap to select a song on your phone, click a mouse, or type on a keyboard today.”

The Future of AR

According to FRL, the technique used to detect the electrical signals — electromyography — is so sensitive, it can record millimeter-sized movements.

Eventually, the researchers believe their neural wristband might be sensitive enough to work without any movement at all — it would sense the intention to move and respond to that.

FRL also imagines augmenting the tech to provide haptic feedback for AR users, too — the wristband could vibrate when a person receives an email, for example.

For now, though, the device is still in the research and development phase, and FRL has said it’s years away from unveiling a consumer-ready product.

However, if the neural wristband can live up to its potential, it could blur the line between the real world and the augmented one almost to the point that it disappears altogether.

Aerospace
NASA uses “holoportation” in space for first time
Holoportation tech developed by Microsoft virtually sent a flight surgeon to the ISS to talk to an astronaut.
Up Next 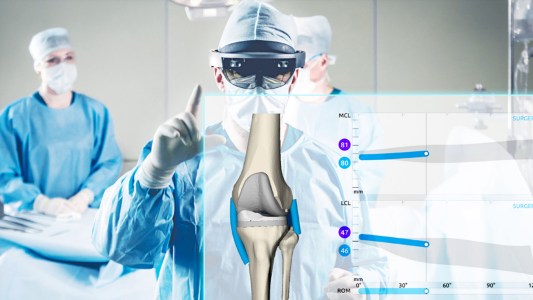 The United States’ first AR-assisted knee replacement surgery was a success, marking another milestone for the use of AR in healthcare.

AR
First AR-assisted knee replacement in America is a success
Subscribe to Freethink for more great stories
Subscription Center
Challenges
Video
Freethink
Subscribe
We focus on solutions: the smartest people, the biggest ideas, and the most ground breaking technology shaping our future.
Subscribe