An Australian startup just modeled a molecule on a microchip, placing atoms in silicon with sub-nanometer precision.

This ability to simulate molecules on the atomic scale — where matter is ruled by quantum mechanics — could improve our understanding of the quantum world and lead to the creation of incredible new materials, such as high-temperature superconductors or super efficient solar cells.

“We could start to mimic how nature behaves and then we can start to make new kinds of materials and devices that the world has never seen before,” said Michelle Simmons, founder of Silicon Quantum Computing, the startup responsible for the microchip.

A couple of million years after making our first stone tools, humans discovered that when we zoom in on matter, looking at the atoms and subatomic particles that comprise it, they adhere to a different set of rules than the ones that govern objects on a larger scale.

These rules (“quantum mechanics”) can have their own useful applications — MRI scanners, solar cells, and atomic clocks all take advantage of quantum phenomena.

“We can start to make new kinds of materials and devices that the world has never seen before.”

But while it’s easy to heft a rock and extrapolate that it might be good for bashing things, it’s not so easy to see or understand how matter behaves on the quantum scale — especially since observation itself affects quantum systems.

We can use computer programs to simulate how some small molecules behave on the atomic or subatomic level, but that isn’t a viable option for larger molecules: there’s too many possible interactions between their particles.

“If we can start to understand materials at [the quantum] level, we can design things that have never been made before,” Simmons told ScienceAlert. “The question is: how do you actually control nature at that level?”

The answer, it seems, is by modeling molecules on silicon chips.

For a recent study, the SQC team successfully manufactured a microchip at the atomic scale, creating 10 uniformly sized artificial atoms — also known as “quantum dots” — and then using a scanning tunneling microscope to precisely position the dots in silicon.

The team modeled their chip after the structure of polyacetylene, a molecule made from carbon and hydrogen atoms connected by alternating single and double carbon bonds.

Once it was built, they could apply an electric charge to one part of the chip (the “source”) and study how it moved along the chain of atoms to exit at another part (the “drain”).

“We’re literally building it from the bottom up, where we are mimicking the polyacetylene molecule by putting atoms in silicon with the exact distances that represent the single and double carbon-carbon bonds,” said Simmons.

Based on theoretical predictions, polyacetylene is supposed to behave differently depending on whether the chain of molecules begins and ends with double carbon bonds or single carbon bonds.

To check if their modeling technique was accurate, the researchers created one chip based on each version — and saw that the number electrical peaks did change as the current ran through each version.

“This confirms long-standing theoretical predictions and demonstrates our ability to precisely simulate the polyacetylene molecule,” according to SQC.

The team also observed an electron existing in two places simultaneously, an example of the quantum phenomenon superposition.

“What [this model is] showing is that you can literally mimic what actually happens in the real molecule, and that’s why it’s exciting because the signatures of the two chains are very different,” said Simmons.

The team chose a 10-dot chain of the polyacetylene molecule to demonstrate its tech because that’s something we can simulate with classical computers. Now they’re looking to scale up.

“We’re near the limit of what classical computers can do, so it’s like stepping off the edge into the unknown,” said Simmons. “And this is the thing that’s exciting — we can now make bigger devices that are beyond what a classical computer can model.”

These future quantum models could be for materials that lead to new batteries, pharmaceuticals, and more, predicts Simmons.

“It won’t be long before we can start to realize new materials that have never existed before,” she said.

Physics
Black hole mergers obey the laws of thermodynamics
An analysis of the gravitational wave data from black hole mergers show that the event horizon area, and entropy, always increases.
Up Next 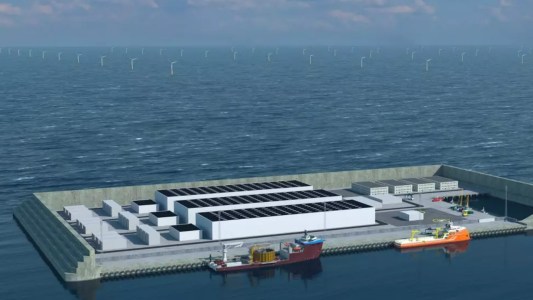 Denmark is building an artificial island in the North Sea that will eventually be capable of meeting all the nation’s electricity needs.