In September 2020, the Toyota Research Institute unveiled a Spiderman-like cleaning robot that descended from the ceiling of a mock home in Silicon Valley to wipe down kitchen counters.

It’s now released a video demonstrating the upright robot’s newest skills — including one that could help it keep seniors’ houses in order.

The challenge: While seeing a reflection in a toaster isn’t going to stop us from knowing that it’s a toaster, robots can be easily confused by reflections, as well as transparent objects, such as glasses and windows.

Our houses are full of those tricky objects, so training robots to see them for what they are is key to bringing domestic bots into our homes.

This approach makes it easier to train the home robot because researchers don’t need to actually collect and label countless images of real objects in real settings — they can use synthetic data.

Say cheese: Based on the new video, this training allows Toyota’s cleaning robot to quickly identify a clear glass on a table and know to move it before wiping down the surface — good news for anyone who wants a domestic robot but doesn’t want to clean up a lot of broken glass.

The home robot also showed off another less useful, but equally human skill in the video: the ability to take a selfie.

Why it matters: About 12% of Earth’s population is over the age of 60, but that’s expected to grow to 20% by 2050 — and that increase in seniors is going to increase demand for caregivers.

While Toyota’s cleaning robot is still a prototype, the company’s goal is to have domestic robots ready in time to help care for that aging population, allowing seniors to live independently in their homes as long as possible and freeing up younger people for other types of jobs. 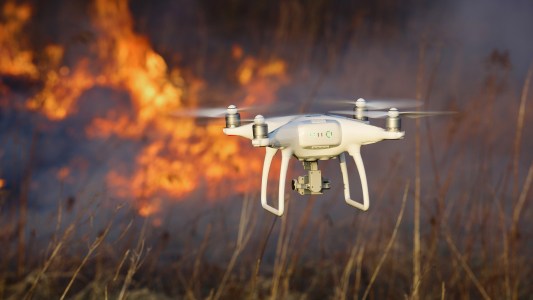 To help first responders find people during disasters, researchers are training a search and rescue drone to listen for human screams.