To help first responders find people during disasters, researchers are training a search and rescue drone to listen for human screams — and then locate their source.

Help from above: Drones are proving incredibly useful for search and rescue operations. If a person is lost, sending a drone over an area to look for them is faster than trying to cover the same ground with people or dogs.

It’s also safer to use a search and rescue drone if the person happens to be trapped in a disaster zone, such as the site of a wildfire or in a collapsed building.

The challenge: It’s not always possible for a search and rescue drone to get a clear picture of what’s happening below them.

In a fire, for instance, smoke might obscure their optical cameras, while the heat could limit their ability to use thermal imaging. If someone is trapped under part of a building, the drone might just miss them altogether.

So engineers at Germany’s Fraunhofer FKIE research institute are training a search and rescue drone to detect the sound humans are most likely to make if trapped or lost: screams.

To develop it, they first recorded audio of themselves screaming and making other “impulsive sounds” that someone might make if in need of help.

They then picked out common acoustic signatures within the sounds and trained an AI to detect the noises while filtering out unimportant ones, such as the sound of a drone’s rotors whirring.

Once their software was ready, the researchers equipped their search and rescue drone with multiple microphones, rigging the whole thing up so that the drone could detect the sound of a person in distress and estimate their location.

The next steps: During tests in an open field, the search and rescue drone was able to estimate the location of screaming people within a few seconds, engineer Macarena Varela told the Washington Post.

The team plans to add another microphone to the drone, allowing it to pick up noises from hundreds of meters away.

The device is still in the prototype stage, but if it reaches deployment, they envision the drone wirelessly transmitting a victim’s location to first responders — letting them know exactly where to go to rescue people in distress.

Drones
UK tries cancer meds by drone
The UK’s National Health Service (NHS) is using drone deliveries to make it easier for cancer patients to obtain chemotherapy.
Up Next 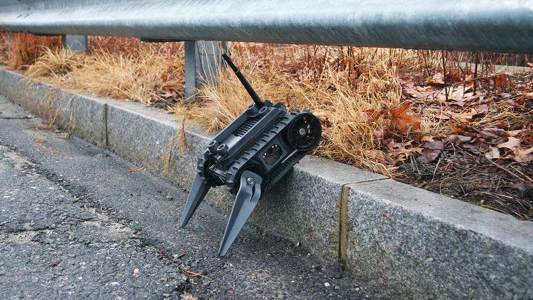 Teledyne Flir has sent at least two of its rescue robots to help hunt for survivors in a collapsed building in Florida.