Researchers at Penn State have developed a device that converts waste heat into electricity more efficiently than any other — and it’s flexible enough to wrap around heat-emitting pipes, recapturing wasted energy.

Waste heat: As machines work, they release heat. If you’ve ever felt the bottom of your laptop or the hood of your car after either was running a while, you probably already know this.

What you might not know is that up to 70% of all energy produced by human activity (including 65% of fossil fuel energy) ends up as this “waste heat.”

“It’s the biggest source of energy on the planet,” Joseph King, a program director for the U.S. government’s Advanced Research Projects Agency-Energy, told Yale Environment 360 in 2018.

The potential: There are already devices that let us tap into this energy source. They’re called “thermoelectric generators,” and they’re made from materials that convert differences in temperature into electricity.

Place one side of a thermoelectric generator near something producing waste heat, and electrons in the material will move to the opposite, cooler side — this generates an electric charge that can be harnessed.

Still, most waste heat is, well, wasted because today’s thermoelectric generators are difficult to scale up efficiently and have a rigid design that can make them hard to use “in the wild.”

How it works: Penn State’s new thermoelectric generator can reportedly overcome both issues.

It looks a bit like a metal Kit Kat, but rather than chocolate holding the bars together, they’re joined by strips of flexible metal foil — this enables the device to wrap around a curved surface.

Thermoelectric generators can convert differences in temperature into electricity.

This isn’t the first example of a flexible thermoelectric generator, but when the researchers tested it on a gas flue, they found that it demonstrated a higher efficiency and power density than other state-of-the-art devices.

“Think about an industrial power plant with pipes hundreds of feet long,” researcher Shashank Priya said. “If you can wrap these devices around an area that large, you could generate kilowatts of energy from wasted heat that’s normally just being thrown away.”

“You could convert discarded heat into something useful,” she continued.

The big picture: A scaled-up version of Penn State’s thermoelectric generator performed better than other units, but it didn’t perform as well as a smaller version — and at just three square inches, that “larger” device was still quite small.

It’s not clear how efficiently the tech would perform at the scale the Penn State team is considering, but with so much waste heat being produced from so many sources, a cheap device that captures a decent fraction of it could still have a significant impact on our energy usage.

“A large amount of heat from the energy we consume is essentially being thrown away, often dispersed right into the atmosphere,” Priya said. “We haven’t had cost-effective ways with conformal shapes to trap and convert that heat to usable energy. This research opens that door.” 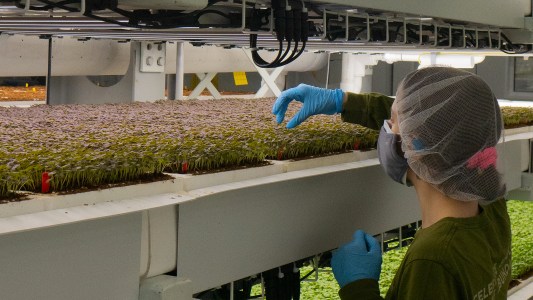 Upward Farms plans to build what will be the world’s largest vertical farm in Pennsylvania — and fish are going to fertilize its crops.

Agriculture
The world’s largest vertical farm is opening in Pennsylvania
Subscribe to Freethink for more great stories
Subscription Center
Challenges
Video
Freethink
Subscribe
We focus on solutions: the smartest people, the biggest ideas, and the most ground breaking technology shaping our future.
Subscribe