The newly launched Empathy app is designed to help grieving families know what to do when someone dies — and then actually help them do it.

“Logistics are made hard by grief, and grief is made harder by logistics,” Empathy CEO Ron Gura told GeekTime.

“Software can and will play a huge role in helping families deal with loss and will hopefully drive a much needed change in the industry at large.”

The challenge: After a person dies, their families are often left with a long list of tasks to complete.

Within days, they might need to plan the funeral and write the obituary. After that comes the settling of the estate, which can involve everything from closing the deceased’s bank accounts to selling their house.

This latter process can be incredibly complicated and time-consuming — on average, it takes about 570 hours of work on the part of the executor, and it usually isn’t complete until 16 months after the death.

“It’s almost like a second job, and it’s painful, it’s overwhelming, and you don’t know what to do first,” Gura told Fast Company.

The idea: Gura suspected that tech could help people navigate this complicated process — but no one was getting into the death space because… well, people don’t want to think about death.

“This whole industry has been passed on by the innovation community,” Gura told Geektime — so he and his Empathy co-founder Yonatan Bergman decided to be the ones to do it.

“Technology can help reduce the burden from families, offer them a channel of clarity and peace-of-mind regarding the tasks ahead,” he said.

How it works: The Empathy app acts like a digital assistant for people who’ve recently lost a loved one. After asking users to answer a few questions about the deceased, it offers personalized guidance divided into Paths, such as “The Funeral” and “Taxes.”

Each Path is broken down into steps to make the process seem less overwhelming. The app suggests a timeline for the steps, too, letting users know what should be done immediately and what can happen later.

It’s painful, it’s overwhelming, and you don’t know what to do first.

Users have access to a support line, where human experts can help them with such tasks as filling out forms or finding local professionals (lawyers, accountants, etc.).

The Empathy app is free for the first month, but after that, users must pay a one-time fee of $65.

Will it help? Empathy is only just now launching, and we won’t know how useful the app is until people have a chance to use it — right now, all we have to go on is a grand total of 11 App Store reviews. (FWIW, those people have given it a 4.3 star rating.)

The startup has secured $13 million in funding, though, so its co-founders aren’t the only ones who see potential in Empathy — investors do, too. 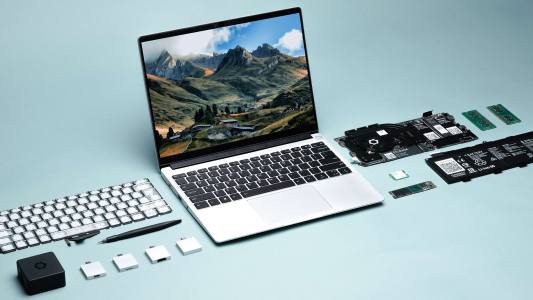 Framework has announced a new modular laptop that’s easy to repair and upgrade, which could make it last twice as long as the average laptop.

Computer Science
An easy-to-repair modular laptop is launching this summer
Subscribe to Freethink for more great stories
Subscription Center
Challenges
Video
Freethink
Subscribe
We focus on solutions: the smartest people, the biggest ideas, and the most ground breaking technology shaping our future.
Subscribe