The robotics revolution is upon us. And we submit to you that it (probably) won’t be a bloody one.

Why? Because leading robotics researchers in the U.S. and elsewhere are focusing their attention and energy on making machines that will make human life better.

When we talk about robots–heck, when we think about robots–we’re mostly talking and thinking about what’s called “hard” robots, meaning they’re made from hard materials (like metal).

But to make machines that can work inside humans, we’ll need to see big advances in the field of “soft” robotics, i.e., robots made from rubber-like materials and powered by chemical reactions rather than metal batteries. And those advances are happening now.

Just this month, researchers at Harvard announced the creation of a fully autonomous robot that has no metal components. It’s called the Octobot, and it works like this:

We already use robots to help us park our cars and clean our houses. But we might soon use them to do a lot more than that. In The Wealth of Humans: Work, Power, and Status in the Twenty-first Century , Ryan Avent argues that there’s no hard limit to the types of jobs robots could do. He recently spoke to Timothy B. Lee at Vox about whether we’ll eventually see robots acting as our doctors and therapists.

We’re one prototype closer to a real-life mech suit

South Korean automaker Hyundai recently unveiled an upgraded version of the exoskeleton they first publicized last year. And this one looks really close to being market-ready.

Like most exo manufacturers, Hyundai says the suit can help restore mobility to the elderly and the injured. But new pics released by the carmaker suggest the suit could be useful for all kinds of people doing all kinds of work.

Sporting enthusiasts who can’t compete in the conventional Olympics due to the use of prosthetic devices will get their own competitive venue at October’s first Cybathlon in Zurich, Switzerland. But instead of tossing javelins or jumping hurtles, participants will compete by demonstrating control of their preferred assistive technology. “For competitors with prosthetic arms,” The Next Web reports, “contests include slicing loaves of bread and opening jars of jam. Other events include people climbing stairs or walking across stepping-stones.”

Should we be scared of robots stealing our jobs?

And they may even be able to do jobs that humans simply can’t. Like stopping the invasive lionfish species from destroying the Gulf of Mexico and the Atlantic Ocean. 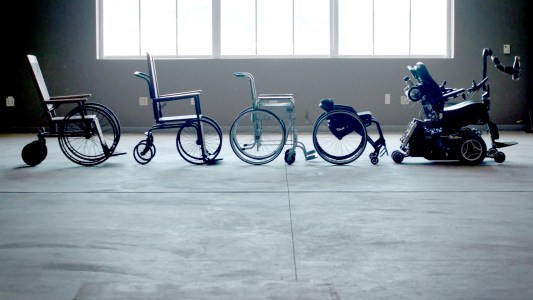 Part Wheelchair. Part Robot. Is this the future of accessibility?