As wildfires continue to escalate in frequency and ferocity, wineries may find ghostly reminders in their casks. Compounds released by the flames can be absorbed into the grapes’ skin, leaving tastes that can range from “smokey soupçon” to “cigarette butt” — potentially ruining a year’s vintage.

California company Tastry hopes to ameliorate the issue as winegrowing regions stare into a hazy future of droughts and fires. Using their AI platform that “tastes” wine, the company wants to help wineries predict how their smoke-tainted wine may taste and, if possible, how best to fix it.

“Following Tastry analysis, TastryAi predicts the effects of smoke taint on the taste, aroma, and texture on finished wine,” the company says.

This could allow winemakers to then potentially fix the problem using products that can alter the wine’s flavor, or by blending wines together.

“Tastry is committed to doing its part in helping wineries navigate what’s expected to be another detrimental fire season in California,” CEO Katerina Axelsson said.

Tastemaking AI: Axelsson was working at a winery when she noticed “idiosyncrasies” in how wines were evaluated, she tells Freethink. Winemakers were generally testing for one compound, figuring out how much of it was in the wine, and using that information to predict how it would taste.

“The problem is, it’s not very predictive,” Axelsson says. Her hypothesis was that all the various compounds in a wine worked in concert to give it its flavor.

“There’s a flavor matrix effect in that chemistry, and other compounds in that chemical soup are masking or allowing that compound that you were originally looking for to be expressed.”

Drawing on her chemistry background, Axelsson began sampling wine, identifying the thousands of compounds inside of it and using AI to figure out how they interact with each other — getting a snapshot of the entire wine.

Compounds released by the flames can be absorbed into the grapes’ skin, leaving tastes that can range from “smokey soupçon” to “cigarette butt.”

From there, she could figure out the wine’s flavor profile and compare and contrast it with other wines in the database. Using this information, Tasty debuted a wine recommendation app, and provides wine analysis services to winemakers — which now includes analyzing for smoke taint.

Where there’s smoke… Anyone into wine will tell you — be delighted to tell you, in fact — how the environment a grape grows in plays a complex and crucial role in its taste. Unsurprisingly, then, smoke contamination is a lot trickier than “was there a fire nearby?”

“Just because you have smoke doesn’t mean your grapes will be smoke-impacted,” UC Davis researcher Anita Olberholster told Wine Enthusiast. “What we tell growers is, if there is smoke, there is a potential risk. But it’s just a potential risk. Don’t assume. It’s very difficult to predict.”

Tastry’s AI is meant to take some of the difficulty out of that prediction.

More than just giving wineries a head’s up on possible smoke taint, the analysis can also help them figure out ways to mitigate it, like blending options or using oak additives, saving a smoke-tainted vintage.

Tastry’s AI got the data it needed from last year’s infernos. As labs that provide smoke analysis became overwhelmed, Tastry dedicated some of its own lab space to finding out how much of a smoky compound may be in a batch. With that data, Axelsson plans to go beyond just saying “how much” this year.

“We kind of add an extra step to it, and we say ‘within this limit, for this particular … chemistry of a wine, this wine is going to have a favorable outcome,’” Axelsson says. “As in, consumers are going to receive it positively. So we add context to that equation.”

With climate change driving longer and more vicious wildfire seasons, Axelsson believes the industry is gearing up for a flame-kissed future, developing ways to save as much vino as possible.

“I really believe there’s a lot of really good wine out there,” Axelsson says.

“And we just don’t want to waste it.” 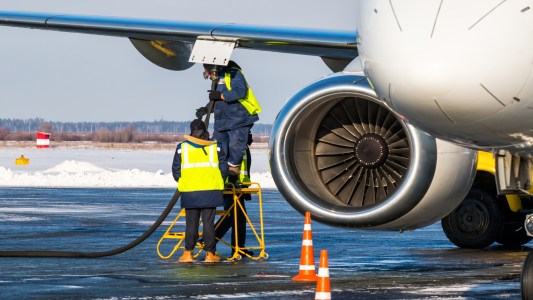 Clean Energy
We could see planes fueled by captured CO2 in 2022
By Amanda Winkler
Subscribe to Freethink for more great stories
Subscription Center
Sections
Video
Freethink
Subscribe
We focus on solutions: the smartest people, the biggest ideas, and the most ground breaking technology shaping our future.
Subscribe