The irradiated hulk of the USS Nevada — scarred and rent, guns pointing into the abyss of the deep ocean — appeared through the murky gloom, undisturbed in its unfathomably dark and inaccessible grave, three miles below the Pacific Ocean.

An AUV is essentially an underwater drone. Able to perform its tasks without being tethered to the surface or needing a human operator, AUV platforms are revolutionizing how scientists and researchers scan and study the sea.

The speed, efficiency, and cost savings of AUVs are quickly reshaping the field.

“Technology is rapidly overtaking, and enhancing, our ability to effectively work on the high seas and in the deep,” says Jim Delgado, senior vice president at SEARCH. Delgado has wanted to be an archeologist since dreaming of vine-choked ruins in elementary school, and his career has taken him to most every sea and depth.

The speed, efficiency, and cost savings of AUVs are quickly reshaping the field, Delgado says. He witnessed submersible robots’ abilities firsthand while mapping the haunting wreck of the Titanic in 2010.

Two REMUS 6000 AUVs provided a detailed map, revealing a veritable time capsule of items, as well as the wrenching effects its impact had on the seabed.

The Benefits of Underwater Drones

These AUVs were developed by the Woods Hole Oceanographic Institute, where Jim Bellingham serves as director of the Center for Marine Robotics. A pioneer in the AUV field, Bellingham has been developing underwater drones since the late 80s.

An AUV provides economic and efficiency benefits, as well as the ability to stay under longer than any human outside of a full-size sub. Underwater drones are taking on roles in oceanography, marine biology, the military, and corporate offshore interests.

I wouldn’t do a project now without starting with an AUV survey.

Economics is a key concern for ocean-based research, Bellingham says. Want to do something at sea you routinely do on land? Take the cost and multiply it by a factor of ten.

“If you want to then go and do it in the deep ocean? Multiply again, probably by a factor of 100,” Bellingham says.

Consider a wreck search. Research vessels perform these searches by towing acoustic sensors behind them, sometimes thousands of feet deep and at the end of thousands of feet of cable. The drag is immense, Bellingham says, forcing the ships to crawl along the surface — and every day can cost tens of thousands of dollars.

To ensure they cover an area thoroughly, ships do what’s called “mowing the lawn,” moving back and forth across a space to make sure they get it all. Here’s the issue with dragging a sensor behind you, though; it doesn’t exactly turn on a dime.

“I have to actually very slowly arc around, and set myself up, and re-enter that area,” Bellingham says. “And that becomes an enormous problem.”

An AUV requires no tow cable or tether; drop it off the side, and it will mow your lawn with precision, pirouetting at either end. Bringing an AUV or two can help make your expedition more efficient in other ways, too, Bellingham says. The humans and surface ships can perform other tasks while the AUV does its work, potentially altering the entire structure of a search expedition.

For some applications, an AUV can eliminate the need for an expedition altogether. By deploying underwater drones from the shore, researchers can explore the ocean without fear of weather conditions — or risk of contracting COVID-19 in tight ship’s quarters, a new concern of late.

Already AUVs are capable of lengthy undersea voyages, says Jules Jaffe, principal investigator at the Jaffe Laboratory for Underwater Imaging at the Scripps Institute of Oceanography. (Jaffe also helped to develop the underwater optical system used to find the Titanic.)

Winged gliders can carve parabolic paths through the sea, adjusting their buoyancy to ride up and down the water column.

“Those can go out for a month or two,” Jaffe says. UCSD’s Argo project uses 4,000 autonomous floats to gather salinity and temperature data, and avoids the propulsion power issue all together.

“They’re getting pushed around by currents, which is of interest to us,” Jaffe says, capitalizing on the free ride to gather data on ocean currents and flows.

Current underwater drones depend mainly on acoustic sensors to guide their journeys, says Tali Treibitz, head of the Marine Imaging Lab at the University of Haifa.  Even those equipped with underwater cameras use them for image gathering — mapping geographic features, offshore oil infrastructure, telecom cables, and shipwrecks — rather than for guidance.

“The field of vision for AUVs is still in its infancy,” she says. “Because you don’t see well underwater, it’s difficult to use the cameras as an input for the autonomy of the robot.”

Treibitz, who was a postdoc with Jaffe at the Scripps Institute, is developing an image enhancement algorithm, which reverses water’s impact on light and color, essentially evaporating the sea. This will be run in real time, in combination with path planning tools developed by her colleague Morel Groper, to autonomously steer the drone.

“What we want to do is to actually give ‘eyes’ to the AUV,” Treibitz says. “To enable it to process the images in real time, actually understand what it sees and react.”

Because they can stay underwater far longer, AUVs have the potential to finally shadow marine creatures in the timeframe needed for scientific observation. Treibitz’s team has id’d stingrays and sea turtles; a team in Australia used an underwater drone to hunt crown-of-thorns starfish on the Great Barrier Reef; and the Woods Hole Mesobot is designed to follow jellies.

Delgado, the underwater archeologist, envisions a near-future where pattern recognizing AI can be taught to look for specific objects — say, amphora — and pick them out of the chaotic clutter of a wreck site.

Underwater cameras, even with active and enhanced vision, would be considerably cheaper than an acoustic sensor, Treibitz notes.

An AUV is now an essential tool, Delgado says.

“I wouldn’t do a project now without starting with an AUV survey,” he says. “Particularly at depth.”

Their relentless precision and lower cost of operating is changing the face of exploration. Not only in the abyss, Delgado says, but also along the “drowned edges” of land, where our ancestors hunted, farmed and built, lived, loved, and died. The tie between civilization and the sea may be the great thread that ties history together, the last great blank to be filled in.

“I think we truly are on the verge,” Delgado says, “of a whole new age of discovery and exploration and understanding.” 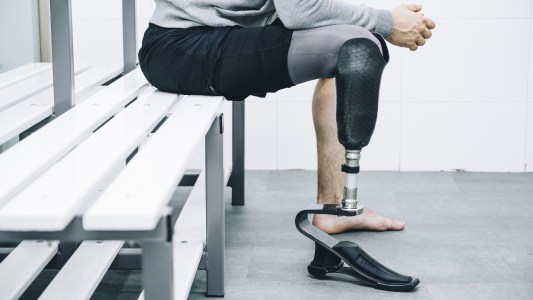 A new computer vision system developed to work with a prosthetic leg predicts the type of terrain ahead so that the limb can adjust accordingly.