Every day, 36,000 cars drive over the Mississippi River on the Interstate 80 bridge. But it could soon become a footpath for humans and bison.

The Bison Bridge proposes to repurpose the old bridge, which is slated for demolition, and turn it into a wildlife crossing so herds can roam freely between Iowa and Illinois.

The wild idea: When the Illinois Department of Transportation (I-DOT) began investigating the future of the 55-year-old infrastructure, considering a new bridge and design, environmentalist Chad Pregracke of Living Lands and Waters saw an opportunity.

He had been imagining a bison footpath for some time. But this spring he announced his idea of turning it into the Bison Bridge — a unique national park that spans the river. It quickly got attention and endorsements, reports the Good News Network.

“This is VERY cool. My old friend Chad Pregracke – whom many of you will remember as the self-appointed garbageman of America’s rivers – is on a mission to create a brand new National Park on the Mississippi River,” TV star Mike Rowe, known for cable’s “Dirty Jobs,” posted on Facebook.

Pregracke has formed The Bison Bridge Foundation and revealed the conceptual plans to the public on March 18. Within just a few weeks, a petition of support had received 27,000 signatures.

“I believe it would be great to restore the natural prairie along the corridor, as well as to save demolition costs; establish a national park; and bring visitors to the Quad-Cities,” Buffalo, Iowa Mayor Sally Rodriguez told Quad Cities.

Wait, I thought they were buffalo? Everyone who grew up in America has likely heard the iconic cowboy song Home on the Range. It starts with, “Oh, give me a home, where the buffalo roam.”

But buffalo have never actually roamed the U.S. — bison did. Buffalo are native to Asia and Africa, whereas bison once grazed on the Great Plains of North America.

The animals were nearly driven into extinction by excessive hunting in the late 1800s. But with the introduction of hunting laws and conservation measures, the population bounced back. Now, there are about 350,000, only about 1% of their original herd size, reports Nature, but enough to keep the animals safe from extinction.

Despite being vegetarians, bison are giant. They are the largest animal in North America, standing about six feet tall and weighing 2,000 pounds. The massive herds stampeded across the terrain, helping plants grow by scattering seeds and trampling growth. The gentle giant was named the national mammal of the United States in 2016.

What will the Bison Bridge look like? According to artist renderings of the rehabbed Bison Bridge, it doesn’t look anything like an old highway. Instead, the charming rebuild would feature a strip of prairie grass, observation areas, hills, and cafes. It would be the longest wildlife bridge in the world.

“It’s a fantastic idea, a heck of a vision,” Kevin Marchek, who worked for the Illinois Department of Transportation, told local news. “We’ve just got to keep pushing this until it comes to fruition.” 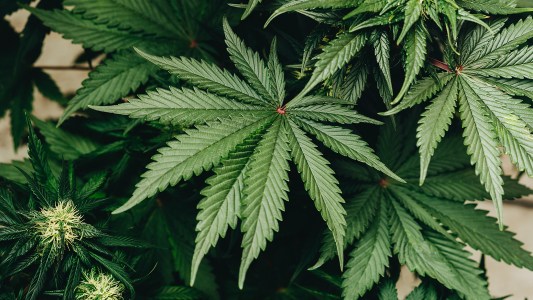