University of Edinburgh scientists have engineered bacteria to convert plastic waste into vanillin, the precious compound used in vanilla flavoring, cosmetics, and more.

“This is the first example of using a biological system to upcycle plastic waste into a valuable industrial chemical,” first author Joanna Sadler said in a press release, “and this has very exciting implications for the circular economy.”

Why it matters: We produce about 350 million tons of plastic every year, and less than 9% of it gets recycled. The rest ends up in landfills or the ocean, where it can harm animals, the environment, and even human health.

“Plastic pollution is something that affects everyone … It’s not one country’s problem. It’s everyone’s problem,” Winnie Lau, a researcher at the non-profit International Solid Waste Association, told Reuters in 2020. “It’s going to get worse if we don’t do anything.”

The challenge: Polyethylene terephthalate (PET) is a type of plastic used to make water bottles, food containers, and other consumer goods.

It’s one of the most recycled types of plastic waste, but the end result of that process is just more plastic products — and if those aren’t recycled, we’re back at square one.

The idea: Rather than recycling used plastic into more plastic, the researchers found a way to transform it into something else: vanillin.

This chemical is what gives vanilla flavoring its characteristic scent and taste, and it’s also used in everything from herbicides to cleaning products. It can be extracted from vanilla beans, but due to high demand, most vanillin is made in a lab.

How it works: Vanillin and a molecule derived from PET — terephthalic acid (TA) — have very similar chemical structures, so, for their study, published in the Royal Society of Chemistry (RSC) journal Green Chemistry, the Edinburgh scientists genetically engineered E. coli bacteria to be able to make the changes needed to convert TA into vanillin.

All they had to do was mix together their engineered bacteria and TA and keep the temperature stable at about 98 degrees Fahrenheit. Within a day, the E. coli had converted 79% of the TA into vanillin.

This is a beautiful demonstration of green chemistry.

Past studies had already shown how bacteria could be used to break PET down into TA and other components, so the researchers then demonstrated how they could use microbes to convert a plastic bottle into vanillin.

The next steps: The researchers say their vanillin would be safe for human consumption, but they still need to confirm that with tests. They’re now focused on increasing the bacteria’s conversion rate and scaling up the process to create more vanillin from more plastic waste.

“Using microbes to turn waste plastics, which are harmful to the environment, into an important commodity and platform molecule with broad applications in cosmetics and food is a beautiful demonstration of green chemistry,” Ellis Crawford, publishing editor at the RSC, said. 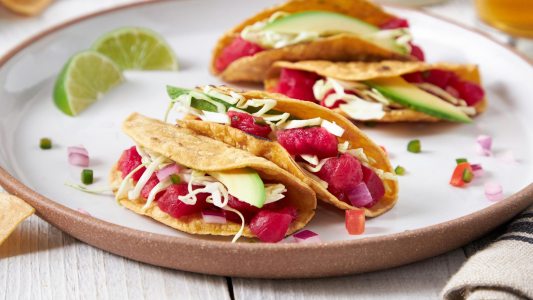 Plant-based tuna might be inside your next sushi roll.