The state of shopping: Online grocery delivery existed before the pandemic, but just like Zoom and amateur breadmaking, COVID-19 really boosted its popularity, leading to a 54% increase in sales over 2019 — and many buyers don’t want to return to the old way of shopping.

“A large portion of consumers who became first-time online grocery buyers during the pandemic now prefer this mode of grocery shopping due to convenience,” Whitney Birdsall, eMarketer senior forecasting analyst at Insider Intelligence, said in a report.

The challenge: Increased demand for online grocery delivery has meant an increased supply — seemingly every grocery store now offers the service, and countless third-party companies have emerged to deliver groceries for those that don’t.

Gorillas is one of the startups vying for a spot at the front of that pack — and it just might be able to secure it.

How it works: Rather than delivering other grocery stores’ goods, Gorillas operates its own mini warehouses stocked with products.

While many grocery delivery services, including DoorDash and Instacart, rely on gig workers to deliver orders, Gorillas employs a fleet of full-time bike couriers.

Not only is that approach presumably better for the workers — the company boasts that they receive full-time benefits — it’s also better for customers and the environment.

You can expect to see Gorillas launch in other U.S. cities by the end of the summer.

Because the couriers are on bikes, they aren’t producing any climate-destroying car emissions. They also have more mobility, which contributes to Gorillas’ ability to deliver goods in just 10 minutes — far faster than any other service.

It plans to begin delivering groceries in the U.S. for a flat fee of $1.80 on May 30. At first, the service will only be available in a few Brooklyn neighborhoods, but the plan is to expand to other parts of NYC within weeks.

“We are also eyeing other urban markets, and you can expect to see Gorillas launch in other East, Central, and West Coast cities by the end of the summer,” a company spokesperson told Business Insider. 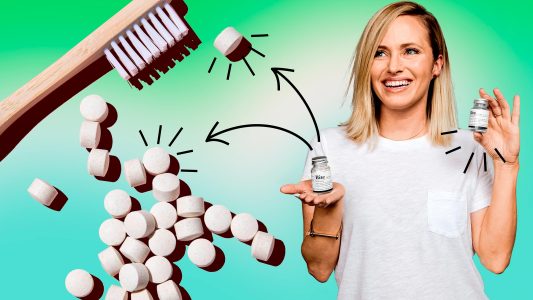 A surprising solution to the plastic pandemic is rising in popularity — zero-waste toothpaste tablets.