This new wearable robotic suit can boost human strength, and it is powered by artificial intelligence — taking human augmentation to new levels.

The AI-based system can send alerts to users regarding ergonomics and safety.

Not only does the exoskeleton give users a power boost, but it has a brain, too. Called the “Smart Safety Companion,” the AI-based system can send alerts to users regarding ergonomics and safety.

An evolution: German Bionic has been providing back support for heavy lifters for some time, reports Smart Industry. Employees at companies like BMW and Ikea have been wearing earlier versions of Cray X. But the new version has assisted walking, supports two body regions, and adds 66 pounds of lifting power.

“It works by gently pushing the legs forward when loads need to be moved from a to b. It thereby helps reduce premature exhaustion and preserve the energy levels of workers conducting tasks involving both lifting and walking,” the company says.

Starting in 2022, users will be able to subscribe to use the exoskeleton for a mere $499 per month.

Robots everywhere: German Bionic isn’t the only one making wearable robotic suits. Virginia Tech’s Assistive Robotics Lab designs interfaces between humans and mechanical and electrical systems. Lowe’s Innovation Labs has people donning robotic suits in their test lab. And some robotic suits are restoring mobility for people who are disabled.

By helping people with challenging tasks, wearable robotic suits will make it difficult to distinguish between the human and mechanical workforce. 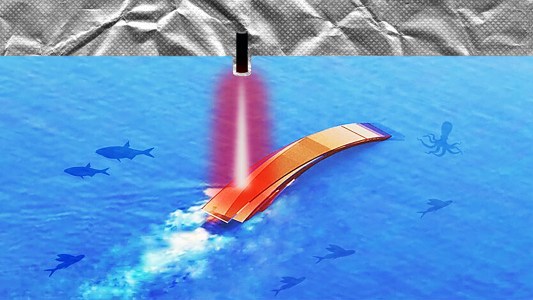 Inspired by steam engines and water-walking insects, this soft robot may one day mop up oil spills at sea.

Robotics
Sun-powered soft robot could mop up the seas
By B. David Zarley
Subscribe to Freethink for more great stories
Subscription Center
Sections
Video
Freethink
Subscribe
We focus on solutions: the smartest people, the biggest ideas, and the most ground breaking technology shaping our future.
Subscribe