A wildlife charity has announced plans to attempt the largest elephant rewilding ever, flying a herd of 13 elephants from a zoo in the U.K. to Kenya to be released into the wild.

However, conservationists disagree over whether the project is in the animals’ best interest, and it’s not clear whether the charity even has the green light from Kenya to move forward.

Wild elephants are incredibly social and mobile animals, living in herds of up to 70 members that may travel 50 miles in a single day.

Elephants in captivity typically have much smaller social networks and much less space to roam. That leads to health problems, such as obesity, and cuts their life expectancy by half compared to wild elephants.

It also leads to signs of mental distress.

“They don’t breed, or if they do, the mothers often turn around and kill the baby,” Lisa Kane, an animal welfare advocate, told the New York Times Magazine in 2019. “They engage in behavior that is completely unknown in the wild.”

Over the past few decades, many zoos have closed their elephant exhibits, citing an inability to provide the animals with adequate care — but often, the elephants are just transferred to another facility.

“Although they are receiving the best care possible, the Aspinall Foundation believes that these animals belong in the wild, and that no elephants belong in captivity,” the organization writes on its website.

This returning of captive animals to their natural habitats is called “rewilding,” and the Aspinall Foundation claims it has successfully rewilded hundreds of animals, including a pair of cheetahs, 8 black rhinos, and more than 70 gorillas.

Other groups have successfully rewilded elephants before, but this will be the first attempt to rewild an entire herd of this size.

Before the trip, the 13 elephants will spend time in the massive crates they’ll be transported in — that hopefully will reduce stress when it’s time for the 4,350-mile flight to Kenya.

The Aspinall Foundation says it is currently deciding between two sites in Kenya, and one of its partners on the project — the Sheldrick Wildlife Trust — has two wildlife orphanages in Kenya, so it’s likely the animals will end up at one of those.

If the project is successful, it would prove to other facilities that once-captive elephants can thrive in the wild, potentially leading to more elephant rewilding efforts. Not everyone thinks the project will be a success, though — or that it should even be attempted.

Keith Somerville, a professor at Kent University’s School of Anthropology and Conservation, notes that a previous rewilding attempt (not carried out by the Aspinall Foundation) resulted in the deaths of 11 black rhinos.

“Those were wild rhinos relocated from one national park to another, and they could not adapt to the water quality and type of vegetation, leading to severe gastric problems and starvation,” Somerville said.

“Aspinall’s elephants have been captive-bred, are used to British weather conditions, and have been fed and watered throughout their lives,” he continued. “They have not had to fend for themselves in finding potable water in the dry season, knowing which leaves and grasses are edible, and which are poisonous or indigestible, and how to protect young elephants from lions.”

Even if the herd is able to adapt to the new environment, the elephant rewilding might not be the best thing for the animals — and people — already living in Kenya.

“Where you have a national elephant population that is rising, combined with a high level of human-elephant conflict involving human and elephant mortality, crop destruction, infrastructural damage, and growing human hostility, this is not a good way forward for conservation and for Kenya’s elephants,” Somerville said.

The day after the Aspinall Foundation announced the elephant rewilding project, Kenya’s ministry of tourism and wildlife tweeted that neither it nor the Kenya Wildlife Service had been contacted about the project.

“Relocation and rehabilitation of an animal from a zoo is not easy and is an expensive affair,” it added at the end of the message.

That likely means the Aspinall Foundation still needs approval from Kenya’s government to get its project off the ground, but Damian Aspinall, chairman of the Foundation, appears confident that it’ll happen — and that the formerly captive elephants will thrive in their new home

“I think we would have done something good in the world if we can achieve this,” he told BBC Radio Kent. “Once they get out there, they are going to be so happy, wandering about, meeting other wild elephants, breeding.” 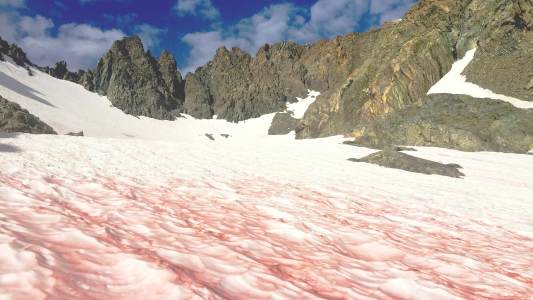 A group of European researchers have hiked the Alps to look into the phenomenon of pink snow. They have now sequenced the DNA from the algae that is the hallmark of the rosey color.

Ecosystems
Scientists map the DNA from that strange pink snow
Subscribe to Freethink for more great stories
Subscription Center
Challenges
Video
Freethink
Subscribe
We focus on solutions: the smartest people, the biggest ideas, and the most ground breaking technology shaping our future.
Subscribe