A quantum revolution is coming, but the first commercial breakthrough we’ll see probably won’t be the quantum computer.

Instead, we’re likely to experience quantum sensors first — devices that could allow self-driving cars to see around corners, give us early warnings for volcanic eruptions and earthquakes, and transform the world of medical imaging.

Quantum sensors can detect really, really tiny signals from our environment — very, very precisely. Quantum states — such as the acceleration or rotation rates of an electron — are very sensitive to changes in the environment, making them a great measuring probe. Quantum sensors can pick up on these changes which help us detect teeny-tiny variations in gravity and magnetism in the world around us.

“Atomic clocks were designed and built to improve the precision of time-keeping, and that improved level of precision, made applications like GPS possible, since GPS is all about timing signals,” Federico Spedalieri, a lead researcher at USC’s Information Sciences Institute, said.

“Any improvement in how well a parameter can be measured, or requiring less resources to achieve a certain level of precision, pushes the boundaries of what is possible to accomplish.”

Because quantum sensors are so sensitive, they have the potential to really accelerate innovation.

Glasgow University is working on a new type of lidar technology using quantum sensors. These sensors would allow autonomous vehicles (AVs) to “see” around corners or through fog and smoke, including over long distances.

Current lidar technology calculates the distance of objects by illuminating one object with laser light and then measuring the reflection of the light with a sensor. By using quantum sensors, scientists could measure the travel time of one particle of light (photon) down to the trillionths of a second. This pin-point accuracy could be used to give AVs more situational awareness, making the roads a lot safer.

According to the BBC, Glasgow’s prototype can detect moving people 100m away  (about the length of a football field), even when they’re around a corner.

These sensors use supercooled atoms to detect tiny fluctuations in gravity.

Scientists can use these sensors to detect volcanic activity by measuring density changes due to rising magma. Glasgow University researchers are experimenting with 40 tiny gravimeters that they placed around one of the most active volcanoes in the world, Italy’s Mount Etna.

While scientists use a wide range of tools to measure volcanic activity, gravimeters promise to be cheaper and more accurate — current instruments have to be continually recalibrated, which is often dangerous and time-consuming, leading to less accurate results.

Another use of gravimeters is locating buried objects.

“Some have said that what lies below one meter under the streets of London is less well-known than Antarctica,” Kai Bongs, professor at Birmingham University in the UK where the technology is being developed, told the BBC.

There are thousands of mineshafts in the UK that aren’t currently mapped  — but a gravimeter would be able to detect most of them.

Energy companies could use the sensors to find oil and gas — and ships would be able to detect underwater objects, as well.

This week, the University of Nottingham announced that they plan to manufacture “the world’s most advanced functional brain scanner.” The secret sauce? You guessed it: quantum sensors that measure tiny magnetic fields in brain cells.

The device can create images of the brain down to millimeter accuracy (the thickness of a credit card) even when the person is moving. This could open up a lot of possibilities for imaging babies and young children!

MRIs are also due for a makeover. While this imaging tool has been extremely valuable to doctors, it’s also extremely expensive. With quantum sensors, doctors could get cheaper brain scans with a higher resolution. Win-win.

Plus, quantum sensors could detect tiny changes to the human body that today’s MRI’s can’t. “In diseases like multiple sclerosis, the processing speed of the spinal cord to the brain changes. But existing tools cannot pick this up,” Sussex University’s Professor Peter Kruger told the BBC.

But quantum sensors could get the job done. 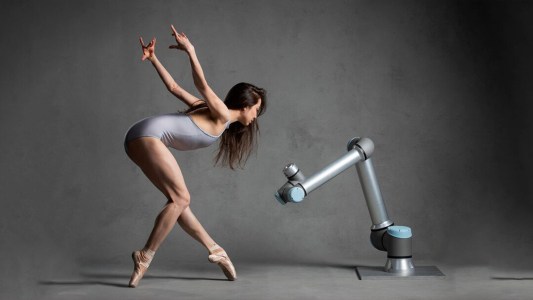 “Quantum ballerina” Merritt Moore choreographed duets during lockdown — and then programmed a dancing robot to perform them with her.

Robotics
Ballerina teaches robot to dance with her during pandemic
Subscribe to Freethink for more great stories
Subscription Center
Challenges
Video
Freethink
Subscribe
We focus on solutions: the smartest people, the biggest ideas, and the most ground breaking technology shaping our future.
Subscribe