The Oscars are going green this year – kind of – featuring plant-based food and forgoing plastic water bottles. These are nice steps, but it’s on the sets of the films – not at their award shows – that the real ecological strides are attempting to be made.

“It’s organized chaos is really what it is.”

Emellie O’Brien, entrepreneur and filmmaker, is describing a film set. Moviemaking is akin to a military operation with hundreds of people under a run-and-gun mentality, where every minute costs thousands of dollars. With all that pressure and motion and noise, thinking about how on-set decisions can negatively impact the environment often isn’t a priority for the crew. But Emellie says it should be.

As expected for such a massive endeavor, film sets create quite a bit of waste and suck up electrical power. The environmental impact can be even more acute than that: Mad Max: Fury Road allegedly rolled right over the Namibian ecosystem, while a Pirates of the Caribbean sequel has been accused of letting toxic waste drain into a creek in Australia (and it was one of those post-trilogy ones you probably didn’t see, making the whole thing even worse).

Cleaning Up the Act

O’Brien got into filmmaking because she wanted to make powerful documentaries. What she saw instead was an industry more progressive in content than process. So she founded Earth Angel, an on-set consulting group with a mission to make filmmaking itself more environmentally friendly.

The Brooklyn-based company is one of only a handful of on-set consulting agencies that assist crews in making sustainable film production. They meet with production teams before filming begins and advise them on building sustainability into the bottom line. Using LED lights, electric-powered/gas-free generators, and streamlining transportation logistics can curtail fuel costs and carbon emissions.

What she saw instead was an industry more progressive in content than process.

Crucial to implementing these changes is what O’Brien calls an “eco PA.” These production assistants aren’t running around getting coffee for the stars – they’re handling waste management and ensuring that the sustainability goals get met. They help make sure that construction materials, sets, and other paraphernalia are stored for recycling or donated to film schools.

According to Earth Angel’s 2019 impact statement, they have so far diverted 927 tons of material from landfills. Sets working with Earth Angel averaged a 73% diversion rate, with 91% their current highwater mark. 46,732 meals have made it to local food banks, recycled paper saved 161 trees, and avoided using 513,616 single use plastic water bottles.

Making Movies Is Expensive. Does Going Green Add to the Cost?

This savings can be surprising to a lot of producers, and O’Brien sees it as her job to educate film companies on how eco-friendly decisions can be a win for the budget and the environment.

There are larger issues than waste contributing to a production’s carbon footprint, which both Green Spark Group and Earth Angel can analyze and share with studios. Filming requires a ton of lighting, and lights can chew up enormous amounts of power and generate enormous amounts of heat – the cost of cooling a set is considerable.

“A number of solutions (for greener lighting) have been coming to market, and our productions have really been embracing them,” says Shannon Bart, sustainability director at NBCUniversal.

Among those solutions are LED lights that look better on camera than their predecessors and battery-powered generators. Combine the two, and electrical demand is reduced, along with fuel costs and emissions. Brooklyn Nine-Nine and The Magicians are among the NBCUniversal shows using new electric power units.

Industry-wide cooperation and standards for sustainable film production will be needed to make a true dent in Hollywood’s carbon footprint. The Producers Guild of America offers a Green Production Guide, which Green Spark Group and Earth Angel consulted on. Using the guide, studios are working together to optimize and spread green set practices. Together, they can leverage their buying power to shift the industry.

“(We) collaborate a lot with our peers at the other studios,” Bart says.

Hollywood holds a special sway in the public consciousness, an industry whose star power is nearly unmatched.

“I think there’s a lot of value in that visibility, for sure,” Bart says. “If you can get that story out there and inspire other people, then that’s great.” 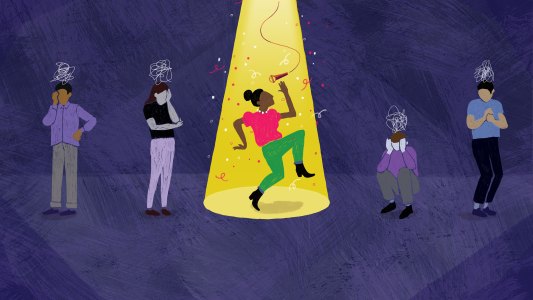 In a judgement-free setting, improv requires the mind to focus on the present, providing natural anxiety relief for performers.