Our senses collect information about the world and deliver it to our brain so that we can understand what’s going on around us and plan our next moves.

For most people, an estimated 80% of this information comes from our eyes, but nearly 50 million people worldwide are blind, while another 34 million have severely impaired vision.

This makes working, living independently, or getting around difficult, plus it affects quality of life and increases the risk of physical and mental health problems.

But new ways to combat the many causes of blindness are heralding a future in which fewer people have to live life completely in the dark.

How they work: Rather than treating a specific blindness-causing health issue, bionic eyes use technology to bypass eye problems.

Typically, a camera mounted on a pair of eyeglasses records whatever is in front of a patient. A computer processor translates the feed into electrical signals, and those signals are then sent to an implant on the eye, optic nerve, or somewhere else near the brain.

Users can’t see the world as it appears with perfect natural vision, but they can see changes in light, which can help them detect doorways, edges of objects, or obstacles.

Where we are now: Second Sight’s Argus II, which treats retinitis pigmentosa — a genetic problem with the retina — is the only bionic eye currently approved for sale in the U.S., but several promising competitors are in development.

Australian researchers are working on a bionic eye called the Phoenix99 to help people with retinitis pigmentosa and other degenerative diseases regain some of their lost sight — it’s already been tested in sheep, and the researchers hope to start human trials soon.

The drawbacks: Implanting anything in or near the head is always somewhat risky, and the bionic eyes in development today aren’t a cure for blindness so much as a way to make living with it less challenging.

Like any tech, bionic eyes can also break down, and if the company that makes a patient’s bionic eye stops offering repairs and updates — as Second Sight recently has — users can be left with obsolete, nonfunctional implants in their heads.

How they work: Most of the cells in our bodies are specialized, but stem cells still have the potential to develop into many types of cells. By placing stem cells in the right environment, scientists can coax them into developing into specific kinds of cells.

Many research groups are exploring the use of stem cells to cure blindness, with one of the most promising approaches targeting a part of the eye called the “retinal pigment epithelium” (RPE).

RPE dysfunction is linked to several common causes of blindness, including AMD and diabetic retinopathy — blindness caused by diabetes. By creating new RPE cells out of stem cells and then transplanting them into patients’ eyes, researchers hope to improve their vision by rebooting eye cells.

More than 50% of participants saw an improvement in their treated eye or vision loss stopped.

Where we are now: In 2021, biotech company Regenerative Patch Technologies reported the promising results of a phase 1/2 trial testing an implantable patch laced with lab-grown RPE cells.

For the trial, 15 people with advanced AMD had the patch implanted into whichever of their eyes had the worst vision. More than half either saw an improvement in their treated eye or vision loss stopped. The untreated eye got worse for 80% of patients during the trial.

The stem cells for that treatment were sourced from a single donated embryo, but other groups are exploring ways to grow RPE cells using less ethically fraught sources, such as donated human cadaver eyes, or more genetically compatible sources, such as a patient’s own blood cells.

The drawbacks: Stem cell transplants are still experimental and risky, and using them to treat blindness-causing disorders that aren’t linked to RPE cells has proven difficult.

How it works: The human genome contains about 30,000 genes, and variations or mutations in those genes have been linked to thousands of illnesses, including AMD, retinitis pigmentosa, and several other leading causes of blindness.

Eye diseases are a particularly promising target for gene therapy because the eye is easy to access for injections and is less susceptible to immune responses. That last part is important because many gene therapies use viruses to transport genes, and if those viruses trigger the immune system, it could affect the treatment’s safety and efficacy.

Where we are now: In 2017, the FDA approved the gene therapy ​​Luxturna to treat a rare genetic condition called Leber congenital amaurosis. People with the condition are typically born with severely impaired vision, and it can get progressively worse until they’re finally blind.

Leber congenital amaurosis is caused by a mutation in the RPE65 gene, and by injecting a normal copy of that gene directly into patients’ eyes, ​​Luxturna’s developers could improve their vision for three years.

Luxturna was the first directly administered gene therapy approved by the FDA to correct a genetic mutation, and since then, researchers have been exploring the use of gene therapy to treat more common causes of blindness, including AMD, retinitis pigmentosa, and glaucoma.

The drawbacks: Gene therapy is also experimental and risky — it could affect cells other than the ones being targeted, potentially leading to unexpected side effects — and it probably wouldn’t be able to help people who go blind due to injuries, infections, or other non-genetic causes.

We don’t need to wait for new bionic eyes or experimental therapies to clear trials in order to dramatically help millions of people experiencing blindness.

Nearly 90% of people who are blind live in low-income nations, and most are blind due to treatable eye problems, such as cataracts, or preventable malnutrition, such as Vitamin A deficiency. By making basic treatments and preventatives available, we could potentially save the sight of hundreds of millions of people in the coming decades.

Not only could this improve mental and physical health, it could help keep families out of poverty by allowing both them and their caretakers to stay in the wider workforce — potentially creating a positive ripple effect throughout the world. 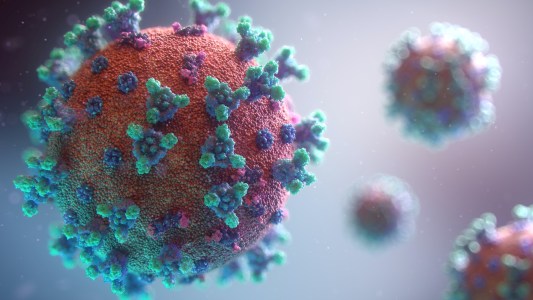 While it’s still too early to draw conclusions, there’s emerging evidence between autoimmune disorders and the virus that causes COVID-19.

Medicine
Despite its disastrous effects, COVID-19 offers some gifts to medicine
Subscribe to Freethink for more great stories
Subscription Center
Sections
Video
Freethink
Subscribe
We focus on solutions: the smartest people, the biggest ideas, and the most ground breaking technology shaping our future.
Subscribe