Autonomous race cars recently sped around one of the most famous tracks in the world in pursuit of a $1 million prize — and the tech behind them could accelerate the adoption of driverless cars on public roads.

The challenge: More than 35,000 people die in car crashes in the U.S. every year, and an estimated 94% of serious crashes are caused by human error — drivers may have been exceeding speed limits, tailgating, or looking at their phones.

By replacing imperfect human drivers with autonomous vehicles (AVs), we may be able to save thousands of lives every year — but such perfect cars don’t exist yet.

“The development of such software can help speed the commercialization of full autonomous vehicles.”

They tasked university students across the globe with designing software that would let a modified Dallara IL-15 racecar operate autonomously at high speeds. The cars would then race around the famed home of the Indianapolis 500, and the fastest would earn its creators a $1 million prize.

“The development of such software can help speed the commercialization of full autonomous vehicles and enhance existing advanced driver-assistance systems (ADAS) in people-driven cars,” ESN and IMS wrote in the announcement.

Start your software: After two years of development (and one pandemic), nine teams comprising students from 21 universities gathered at the speedway on October 23 to put their autonomous race cars to the test.

The initial plan of a head-to-head race was scrapped in favor of a two-round fastest lap competition, during which the driverless cars needed to demonstrate an ability to avoid inflatable barriers and exit the pitlane.

With a two-lap average speed of 135.944 mph in the final round, a group from Technical University of Munich (TUM) walked away with the $1 million prize.

“We’re totally thrilled by the results,” team manager Alexander Wischnewski said. “Our objective was to break 200 kmh [~124 mph], and we did exactly that.”

Growing pains: The challenge included its fair share of drama, with 4 of its 11 runs including significant crashes.

Ironically, the winner of the competition may have been decided by human error — Team EuroRacing’s first of two timed laps was nearly 5 mph faster than TUM’s average, but a coding mistake caused its car to slow to below 90 mph during the second timed lap.

Looking ahead: No concrete plans are in place yet for a follow-up to the Indy Autonomous Challenge, but ESN President Paul Mitchell said he doesn’t expect it to be a one-off event.

Even if it is, though, the challenge may have already served its purpose — several of the competitors plan to make the software they developed for their autonomous race cars freely available online.

“So, you’re going to take some of the most advanced AI algorithms ever developed for autonomous vehicles, and put it out there for industry, for startups, for other universities to build on,” Mitchell told France 24. 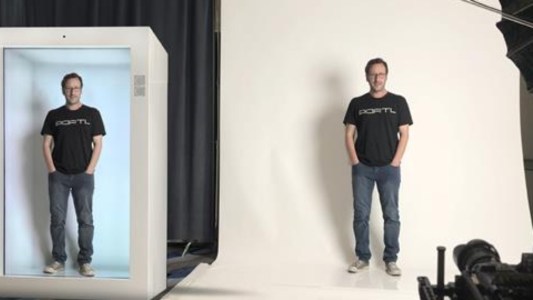 There are 100 of these hologram booths currently located all around the world from Abu Dhabi to Miami.

VR
These hologram machines bring us a step closer to our sci-fi dreams
By Amanda Winkler
Subscribe to Freethink for more great stories
Subscription Center
Sections
Video
Freethink
Subscribe
We focus on solutions: the smartest people, the biggest ideas, and the most ground breaking technology shaping our future.
Subscribe