Holograms have been a staple of science fiction for centuries, but now they may be on the verge of reality thanks to PORTL, a startup based in Los Angeles.

How it works: The startup has designed large, vending-machine-sized booths that they call “PORTL Epic” to generate real-time, life-size holograms. 100 of these booths are currently located all around the world from Abu Dhabi to Miami.

Using a camera and a backdrop (and, of course, PORTL’s proprietary software), people can “beam” themselves into any of these booths — or, even all of these booths at the same time — and interact with other people thousands of miles away.

“Eventually the big plan is that they’re everywhere, and when you want to be there, you beam there, like hologram telephone booths,” David Nussbaum, PORTL’s CEO told Axios.

And, better yet — your hologram will be life-size, 3D, and broadcast in 4K resolution.

“I had one student who said, ‘I could hear the footsteps as they were walking in — it felt like they were in the room with us,'” Bari Hoffman, associate dean of clinical affairs at University of Central Florida (UCF), said. The school recently acquired a PORTL Epic booth for their medical program.

Why it matters: The ability to “beam into” a location that we can’t physically travel to could have huge implications on our business, education, and social lives — something we can all appreciate after the past 1.5 years.

“You can’t be there, beam there,” Nussbaum told the New York Times.

UCF is among PORTL’s most recent customers — the medical school acquired the technology in order to beam in patients so that the medical students can have a more realistic learning environment. For example, the technology allows students to examine the whole patient and pick up on non-verbal cues — something that is lacking in a traditional video call.

Aside from the educational opportunities, PORTL could allow CEOs — or really, anyone — to attend international meetings that may be difficult to travel to. Earlier this year, Christoph Grainger-Herr, CEO of the luxury Swiss watch brand IWC, appeared holographically at a meeting in Shanghai.

And, of course, the technology could allow long distance family members to reunite in a more realistic way — like when P.Diddy beamed into his son’s 23rd birthday party earlier this year.

History of holograms: The concept was popularized in the 1860s by John Henry Pepper, an English scientist, who introduced an optical illusion that used angled mirrors to reflect an image to the audience. This trick became known as “Pepper’s ghost,” and theatre and film productions have been using it ever since.

Since then, various forms of holograms have been tried — for example, Tupac’s set at Coachella eight years ago. This beyond-the-grave performance was really just a souped up version of Pepper’s ghost. According to TechCrunch, Nussbaum became intrigued with the technology and the company he worked for at the time bought the patents that enabled the Tupac performance.

With PORTL, he made a massive improvement on that technology. PORTL’s images can be transmitted day or night and allows for interaction between the person being beamed in and those who are near a booth (something the company has dubbed “holoportation”). And, while the PORTL booths are still a bit clunky, they don’t require any special setup — just plop it down anywhere, plug it in, and you’re good to go. If you’re the one being beamed into another location, you just need PORTL’s “studio-in-a-box,” which resembles a small photography setup.

However, it may not be too long before you have a mini holoportation device in your home. PORTL is working on a mini-version of this system that would be about the size of a desktop computer, according to TechCrunch. 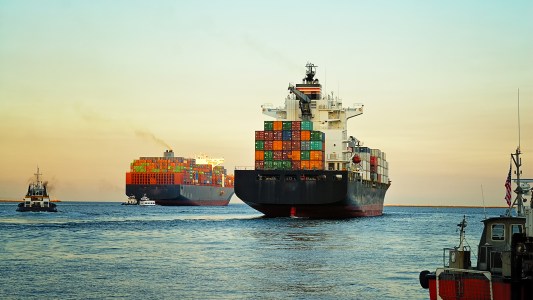 Supply chains around the world are feeling the strain of COVID-19. Are AI-powered, highly detailed “digital twins” the key to a smoother future?

AI
Can digital twins solve our supply chain problems?
By B. David Zarley
Subscribe to Freethink for more great stories
Subscription Center
Sections
Video
Freethink
Subscribe
We focus on solutions: the smartest people, the biggest ideas, and the most ground breaking technology shaping our future.
Subscribe