The status quo: The basic design of freight trains hasn’t changed much in 200 years.

Goods are loaded into wheeled railcars on tracks, and those cars headed to the same destination connect to one another. At the front of the line is a locomotive — usually powered by fossil fuels — that pulls the entire train where it needs to go.

The longer a train is, the more money its operator can save on the cost of crew and fuel — today, it’s not uncommon to see three-mile-long freight trains with more than 200 cars.

These long trains may be more economical, but they also take a long time to load and unload, as well as a lot of space to park. This can limit routes to only large terminals — semi-trucks may then have a longer drive to get the goods to their final destination.

The idea: Rather than using a powered locomotive to pull a line of railcars, Parallel is developing battery-powered, autonomous “rail vehicles” to carry freight.

These vehicles rest directly on the tracks and work in pairs. A filled storage container is lowered onto them by crane, and the vehicles then transport the container where it needs to go, moving either alone or as part of a platoon.

“We think our platoon sizes are ideally between ten and 50 cars,” CEO Matt Soule told Ars Technica. “With ten, you’re sharing the aerodynamic load over multiple cars, and the benefits of that kind of asymptote out around ten cars.”

The vehicles take one hour to fully charge, and each pair can carry 128,000 pounds of cargo 500 miles, according to Parallel.

The benefits: Parallel expects its system to be far more flexible than existing freight trains, as the rail vehicles could be quickly loaded and unloaded at smaller terminals closer to the final destination of the freight.

Parallel says its vehicles require 25% the energy of today’s semi trucks, so using them to get goods as close to their final destination as possible could benefit the environment and save on last-mile costs.

“We’re enabling rail to do more miles because when the terminal becomes smaller, you’ve got more options to put it closer, where your customer and shipper are,” Soule said.

Train of thought: Parallel is still developing its rail vehicles and has yet to test a prototype on a route longer than 50 miles.

Even if the vehicles work exactly how Parallel hopes, many of the U.S.’s short rail lines — the ones branching off the lines between massive terminals — are in need of repair, which could present a hurdle to the widespread adoption of the vehicles.

Parallel will also need to convince private rail companies to start doing something radically different from what’s been done for centuries, which could be a major challenge.

Freight trains aren’t a huge source of greenhouse gas emissions — they account for just 2% of the transportation sector’s emissions in the U.S. — and electric semi trucks are starting to roll out, so the environmental angle might not be hugly convincing.

If the electricity topping off the batteries in Parallel’s rail vehicles is sourced from fossil fuels — and not solar, wind, or some other renewable — the environmental benefits of the EV are diminished as well.

Still, the industry might be willing to give the startup a shot if Parallel can prove that its autonomous rail vehicles are more cost effective than the current system. 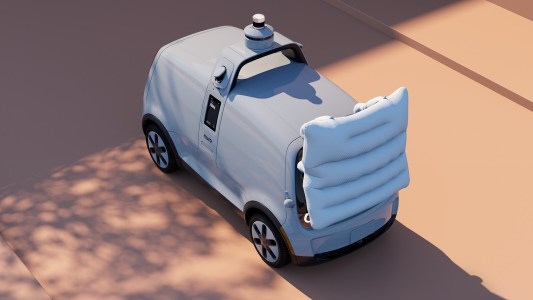 AI
Delivery robots get airbags to protect you in case of collision
By Kristin Houser
Subscribe to Freethink for more great stories
Subscription Center
Sections
Video
Freethink
Subscribe
We focus on solutions: the smartest people, the biggest ideas, and the most ground breaking technology shaping our future.
Subscribe