A team of researchers in Singapore is turning live cockroaches into insect-computer hybrids that could soon help in search-and-rescue missions.

The project turns the conventional approach to insect-like drones on its head: Why build flying robots when nature has already built tiny masters of flight?

Why it matters: Every second counts during search-and-rescue operations. But when a building collapses and people get trapped beneath rubble, it’s often difficult for rescuers to quickly locate the survivors.

Determining the precise locations of survivors not only increases their odds of survival, but it also gives rescuers a better idea of which parts of the rubble can be safely moved without causing further injuries or collapses.

Insects can easily navigate the tiny and dangerous gaps amid rubble. But while insect-like drones, called “micro air vehicles” (MAVs), have existed for decades, they consume a lot of power during flight and can only haul tiny batteries — meaning operating time is typically limited to a few minutes.

“There is still a long way to go before artificial mini robots are really used for search and rescue missions in disaster-hit areas due to hindrance in power consumption, computation load of the locomotion, and obstacle-avoidance system,” wrote the researchers behind the cyborg cockroaches.

As one of the world’s largest cockroaches, reaching up to 3 inches in length, the team selected this species for its high payload capacity during flight.

The researchers spent years studying how to remote control the movements of the cockroach by using electrodes to stimulate different neuromuscular sites, including those that activate flight.

The next step was to outfit the cockroaches with a lightweight “backpack” that hosts the electrodes. These don’t need to constantly stimulate the insect; letting it fly on its own part of the time helps minimize power consumption.

The backpack also contains a small infrared camera that detects heat signatures from humans, sensors that identify body movement and carbon dioxide, and a chip that wirelessly transmits data back to the rescue team.

Using a machine-learning model, the system was able to distinguish between humans and non-humans with 87% accuracy, according to tests described in a 2021 paper. For search-and-rescue operations, the team estimates that about 500 roboticized cockroaches would be needed to scan a 5-square-kilometer area, but the system has yet to be deployed in real-life rescue missions.

The future of bug bots: The team hopes its cyborg cockroaches will be used in the field within the next five years. Until then, the researchers plan to optimize the chips, test how the system works outdoors, experiment with adding solar cells to extend battery life, and automate the processes of manufacturing the backpacks and fitting them to insects.

Outside of insect-computer hybrids, researchers are developing a wide array of bio-inspired MAVs, resembling insects from dragonflies to the common housefly. 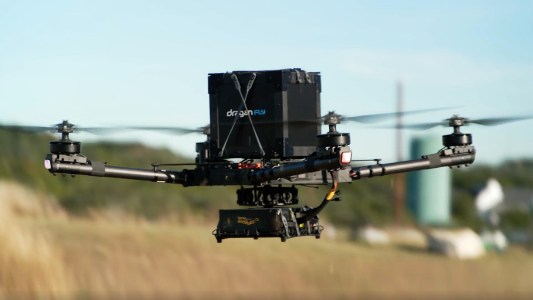 Medical drones are being rushed to Ukraine to help residents get the medical supplies they need in the midst of the war with Russia.

Drones
Medical drones to transport blood being rushed to Ukraine
Subscribe to Freethink for more great stories
Subscription Center
Sections
Video
Freethink
Subscribe
We focus on solutions: the smartest people, the biggest ideas, and the most ground breaking technology shaping our future.
Subscribe