The new Ray-Ban Stories, smart glasses just released by Ray-Ban and Facebook, look exactly like what you see in a spy movie. Discrete enough to pass for a classic pair of stylish glasses, but with a barely-visible built-in camera.

But you don’t have to be a secret agent to own a pair of these shades. Anyone who wants to drop three Benjamins on a pair of glasses can buy them. And that might be the most promising and the most disturbing part about it. Smartphone cameras are everywhere, but at least it is somewhat challenging to film someone discreetly. With these new glasses, secretly filming someone becomes easy.

What they can do: The glasses come in several colors and lens options. They can be sunglasses, prescription, progressive, or have simple, clear lenses. Despite weighing barely more than regular glasses, they still have some heavy capabilities.

The glasses have three main functions. They can take photos and short videos, which are delivered to a smartphone app so users can decide how to share the images. And they can play “open air” sounds without needing headphones, allowing users to listen to podcasts and music or take phone calls. With twin cameras, one on each side of their face, users can add 3D effects to their photos.

While the glasses stay charged for only a few hours, the case acts as a portable battery — charging the glasses in between uses.

“Our mission is to help build tools that will help people feel connected any time, anywhere,” Facebook’s Monisha Perkash told The Guardian. Perkash leads the product team in the Reality Labs division. Their goal is to build actual “augmented reality” glasses.

“To some degree, it’s more overt than what people are doing with phones.”

“We want to create a sense of social presence, the feeling that you’re right there with another person sharing the same space, regardless of physical distance.”

Still, we have a rule in my house — no phone at the dinner table because they distract people from the shared “togetherness” of the meal. The rule applies whether you’re a guest or family. Should I ban the glasses, too? What if they are prescription?

What people think: It is too soon to tell how people will respond to the glasses. They just went on sale last week. But they feel a little invasive to me. Facebook has been under scrutiny for its use (or misuse) of people’s data. Releasing a camera that can discreetly film people will undoubtedly cause a stir.

Facebook says they can’t do anything that a smartphone can’t already do. They highlight some ways that passers-by will know if the camera is in use — like a white LED light on the side of the frames.

“To some degree, it’s more overt than what people are doing with phones,” Facebook Reality Labs chief Andrew Bosworth said, reports Axios.

Let’s give this some thought — to snap a picture of someone with a smartphone secretly; you have to take your phone out of a purse or pocket, unlock it, open the camera app, hold the phone at the right height, check to see if the person is in the frame, then snap the pictures.

To take a photo with the Ray-Ban Stories, you only need to use a voice command or tap a button on the side of the frames.

The future: These new Ray-Bans demonstrate that it is possible to build high-tech features into tiny frames — putting us one step closer to the holy grail of cool, usable AR/VR glasses. Virtual reality is a 360 simulation of the real world, often experienced in a goggle-style headset. Augmented reality superimposes computer-generated images on the viewer’s real-world view.

“What’s coming is going to get absolutely incredible.”

Michael Cuales, the creative director for new media development at North Carolina State University and founder of LEVR Studios, a virtual reality design company, says that VR/AR is about to pivot into education in exciting ways.

“What’s coming is going to get absolutely incredible,” he told Freethink.

VR isn’t just for gaming. There are educational, therapeutic, and military applications. It can give inner-city kids a nature experience. Or it can be used to model tree growth and save a forest. Imagine the unlocked possibilities when the devices go from weighing 4.5 pounds (like the Oculus Quest) to less than 50 grams (like the Ray-Ban Stories) and from requiring a beach-tote-sized bag to fitting in your back pocket. Cuales doesn’t think we will have to imagine it for long.

In the meantime, if you see someone tap their glasses, a la Mission Impossible — don’t say I didn’t warn you. 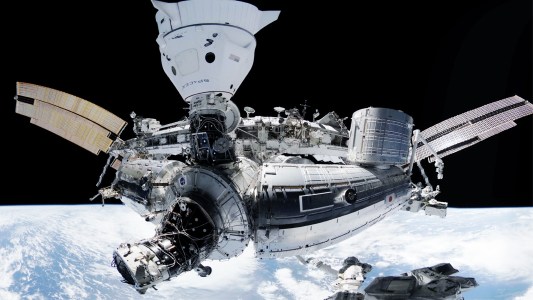 A VR spacewalk filmed by an “outer space camera” will be the centerpiece of the next episode of Space Explorers: The ISS Experience.