All human progress is about overcoming an obstacle. The world gives us a problem, a question, a mystery, and we develop a way to resolve it (or, at least, alleviate it). From the wheel to the internet, we have discovered and invented our way out of all sorts of trouble. The story of science and technology is, in the main, one of making our lives easier.

It’s a curious phenomenon of modern society that we get very excited about individual technologies (the latest iPhone!), yet we preach doom-and-gloom about “technology” as a category. When we talk about “technology,” the conversation often dwells on the harm it causes. Technology makes us less interactive, less happy — less human, even. And yet, most people can’t wait to get a new smartphone, watch a new cinematic technique, or drive a faster, cheaper, greener car.

Instead of talking out of both sides of our mouths, perhaps it is time that we were appreciated just how much we need technology, and how far it has helped us along. That is exactly what philosopher John Danaher does in his recent paper, Techno-optimism: an Analysis, an Evaluation and a Modest Defense.

What makes a techno-optimist?

Obviously, technology is not perfect. Not all inventions are great, and “new” does not mean “good.” There are many legitimate issues with certain technologies, but this true of just about anything in life. Smart phone addiction does exist, environmental destruction is happening, and we are each seeing a rapid, abrupt uprooting of how society has operated for millennia. If we say we’re “techno-optimists,” we are not saying that we are blind to technology’s problems. Optimism is not fanaticism.

Instead, as Danaher argues, optimism is defined by three elements. First, optimists believe “the good prevails over the bad by some distance, with that distance varying depending on the strength of the optimistic stance.” So, in terms of technology, it means the good outweighs the bad. (How far you think it does will depend on your degree of techno-optimism).

Second, optimism tends to associate with an “affirmation of improvement (that is, the sense that things will get better).” The year 2022 is a better time to live than 1880 — or even 1980.

Third, optimists (and pessimists, for that matter) must believe that we can actually measure “good” as a value to track. We can point to this or that technology and say, “These are examples of good things that could only be caused by technological improvement.”

How to defend techno-optimism

Once we grasp the meaning of techno-optimism, we can get closer to understanding — and defending — it more broadly. According to Danaher, in order to properly justify and rationalize techno-optimism, we must do three things: Establish values, determine facts, and evaluate.

Establish values. First, we must establish certain values as being “good.” For instance, a techno-optimist “might argue that it is wonderful that people have more disposable income and a richer set of consumer goods and services from which to choose.” It might be that we think (as Steven Pinker argues) that increased life expectancy and decreased child mortality, hunger, and poverty are all good. Ramez Naam also cites advances in energy production, agriculture, and medicine as values to celebrate.

Of course, as Danaher says, values are contestable and controversial, and “people have different conceptions of what the good life consists in.” Broadly, though, a techno-optimist will have to agree that at least some of these values are the most important elements of the “good.”

Determine facts. Once we have established these values, then we have to present those facts that support the claim that technology provides them. We have to show that technology and science do reduce child mortality, feed the hungry, and cure the population of disease. This is what the likes of Steven Pinker and Matt Ridley do in their books. They collect data that shows how technology can be isolated as the essential cause of improvement in our values. For instance, technology really does feed the world and allow us to live longer.

Yes, we can debate about cherry-picking facts or how strong certain correlations are, but mainly such debates are resolvable. What is more difficult is “future techno-optimism” — the belief that technology will continue to improve our values. Future techno-optimism is exemplified by the futurologists and transhumanists of the world. It’s much harder to discuss facts when dealing with the future, especially when we consider what technology might be like 10, 20, or 100 years from now.

Evaluate. Evaluation is weighing the pros and cons. It is never good science or reasoning to collect facts and data that support only one side of the debate. We need to present the facts that defend values, but we also need to acknowledge facts that contradict those values as well. As mentioned above, technology does have its problems. It can impact our mental health, it ravages the environment, and it drastically upends what being human has always meant. The techno-optimist is the one who believes the good of technology outweighs the bad.

There are two major critiques of techno-optimism that Danaher addresses. First, the “treadmill critique” argues that technology won’t constantly make the world better. We have become so accustomed to technology that we no longer appreciate it as “good” but rather expect it as the norm.

Danaher counters by suggesting that there exists some “values that are not subject to baseline adaptation.” He cites “longer lives, less absolute poverty, fewer life-threatening illness, [and] more equality of opportunity” as examples of “goods” that will always be good, regardless of how accustomed we are to them. They are all something technology will continue to improve.

Second, the “unsustainability critique” is the idea that if “optimism depends on present or continued economic growth, it also depends on the continued technological exploitation of natural resources. All natural resources are finite and have some upper limit of exploitability.” In short, technology does a lot of good, but the damage and exploitation it leaves in its wake is irreparable.

Danaher’s response is that “technology is becoming less exploitative over time.” As a technology improves, then growth “decouples” from exploitation. The example given is aluminum use in tinning. In the 1950s, a drink’s can used 85 g of aluminum. By 2011, with the aid of computer design, it was down to 12.75 g. In fact, as Big Think examined earlier this year, technology often matures and builds on previous mistakes. There’s no reason to assume that continued growth means continued exploitation — at least not on the same scale.

You do not have to adopt a starry-eyed “technology-will-save-humanity” viewpoint to be a techno-optimist. It’s perfectly reasonable to suggest that there are many existing problems with technology, and that it, alone, is insufficient for good to prevail.

Instead, we might sympathize with Danaher’s “modest techno-optimism.” According to this view, “we have the power to create the right institutions for generating, selecting, and creating material technologies, and acting on that belief in a cautious and sensible manner can make it more likely that the good will prevail over the bad.”

It’s a kind of techno-optimism that perhaps needs a bit of human optimism, too. 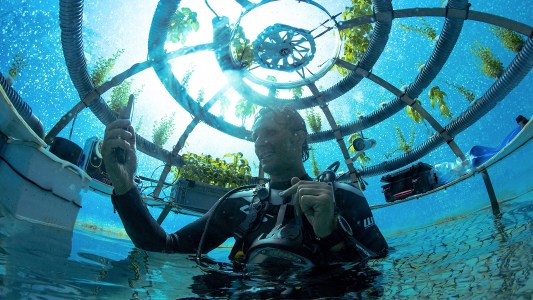 An underwater garden off the coast of Italy is introducing the world to a new type of sustainable agriculture.