We’re about to enter a new phase of the internet, according to many tech entrepreneurs in Silicon Valley who are busy building it.

This new internet — dubbed Web 3.0 or Web3 — is still being created so it’s hard to say exactly what it will look like or what it will do for us.

However, there is one thing that nearly every tech entrepreneur agrees is a goal of Web 3.0: decentralization.

Today’s internet experience is somewhat decentralized, but a lot of our virtual experiences are funnelled through just a few institutions, like Google and Facebook.

It’s hard to imagine how we could fully decentralize — but Web 3.0 may be the answer.

The why: Is there a need for a decentralized internet? For most of us, the current internet works pretty darn well — it enables us to engage and interact and trade with each other in ways we never thought possible. And because of that, it has unlocked trillions of dollars for the world economy.

“The good news is that billions of people got access to amazing technologies, many of which were free to use,” Chris Dixon, general partner at the venture capital firm Andreessen Horowitz, wrote about Web 2.0, the internet we currently use.

A decentralized Web 3.0 could encourage more innovation in the virtual world, outside the structure of the big tech firms.

With Web 2.0, we’re largely always online, thanks to mobile internet, and the content we consume is mostly user-generated, thanks to social media apps like Facebook and Instagram. And now, all of that data is mostly stored in massive data centers located around the world, called the cloud.

All of this innovation has made the internet more accessible and valuable to more people.

But, according to Web 3.0 proponents, this innovation came with some serious trade-offs.

“The bad news is that it became much harder for startups, creators, and other groups to grow their internet presence without worrying about centralized platforms changing the rules on them, taking away their audiences and profits. This in turn stifled innovation, making the internet less interesting and dynamic,” Dixon argues.

Apart from stifling innovation, many Web 3.0 proponents are also concerned about data privacy. Whoever controls the servers controls our data. So, anyone with access to the central server — whether the corporation itself, a government entity, or a hostile hacker — can access and potentially alter the information.

A decentralized Web 3.0 could, in theory, allow us all to own and safeguard our private data, as well as encourage more innovation in the virtual world, outside the structure of the big tech firms.

Best of both: To understand just how radical a shift the next iteration of the internet could be, we should take a look at just how far we’ve come.

Despite its challenges, today’s internet is a massive upgrade from where we started. AOL, dial-up sounds, Netscape, and the common use of the phrase World Wide Web weren’t really that long ago. From the 1990s to early 2000s, the internet provided some interaction with the advent of email, e-commerce, and messaging platforms like AIM — but it was mostly just static HTML pages. It was a place you to go to transmit information and not much else.

It was also extremely technical and not easily accessible to regular people who didn’t know code. And there were no standard protocols for things that drive the internet today, like commerce and payments.

However, it was pretty decentralized.

“Web 1 (roughly 1990-2005) was about open protocols that were decentralized and community-governed. Most of the value accrued to the edges of the network — users and builders,” Dixon tweeted.

Then we entered Web 2.0 and the internet got a whole lot more user-friendly.

We’ve seen the rise of mobile internet (good bye dial-up!), social media, and cloud storage. The internet now is accessible — you can set up a website without knowing how to code — and there are search protocols that make it easy for users to find your content.

Web 2.0 was also when the internet really transitioned to being synonymous with social-media — we saw the rise of interactive experiences, and user-driven content.

Then, the internet got a whole lot more centralized. Most of the services and value started coming through big companies like Facebook, Amazon, and Google.

Some critics say this makes users, like small businesses or content creators, too reliant on a single corporation. For example, Twitter could decide to shut down your account — and with it, all of your data and followers. Your business, and online identity, could take a major hit.

Web 3.0 could be a winning combination of the two former iterations.

“We are now at the beginning of the Web 3 era, which combines the decentralized, community-governed ethos of Web 1 with the advanced, modern functionality of Web 2,” Dixon says.

Trustless: Web 3.0 will be a system of apps that operate on a blockchain, like Etheruem — a decentralized network of computers that enables tools like cryptocurrencies, and smart contracts to operate on an open system.

In crypto-lingo, this makes any transactions that occur on the apps  “trustless” — you don’t have to trust a third party entity (like a bank, or a server company, or another person) to act as an intermediary in the transaction.  Instead, crypto-advocates trust the code or the system itself to verify transactions. The verification process that needs to happen in any sort of transaction — whether it be entering into a legal contract or exchanging digital currencies — takes place through a network of distributed computers.

And because all transactions take place on the blockchain, it’s impossible to forge or counterfeit.

This is what many proponents say is Web 3.0’s greatest feature: by running apps on the blockchain, it will greatly minimize the trust that’s required for global transactions.

That matters because society could be run more efficiently by cutting out the fee-charging middlemen that are involved in many transactions today.

“It’s about attaching each user’s data and money directly to them (Self-Sovereign Identity), creating a public record that they own what they own (blockchain), and letting them take it with them, and profit from it, wherever they go on the web (Interoperability),” writes Packy McCormick from Not Boring Capital.

This seamless, trustless transaction experience could have huge implications: when middlemen are removed, whole new business models and innovations can emerge. We’re starting to see that now with the emergence of decentralized autonomous organisations (DAOs).

The big picture: Much of the language attached to Web 3.0 is pretty idealistic so it may be tempting to shrug it off as unrealistic — but, this is true of most burgeoning movements that aim to create a new way of doing things. There are enormous economic and social advantages that could be realized through Web 3.0 if it lives up to its potential. A truly trustless internet could put users in control of their data, build a new economy where money flows directly to the people who create value, and construct new ways of doing business. 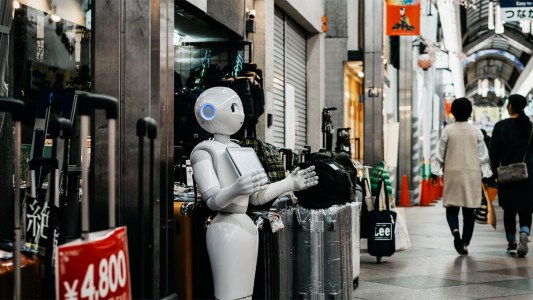 There’s still no telling whether machine-learned common sense is five years away, or 50.