Type 2 diabetes is the most common form of the disease, but artificial pancreases have thus far been limited to those with type 1.

But now, researchers at the University of Cambridge and University Hospital of Bern have trialed the devices in patients with type 2 diabetes, as well as kidney failure (diabetes being the leading cause of kidney failure).

In their small study, published in Nature Medicine, the researchers found that their artificial pancreas — a machine that measures blood sugar levels and automatically adds insulin as needed — improved these patient’s ability to maintain their blood sugar levels, opening the door to more patients getting the breakthrough benefits these machines have provided to those with type 1.

Type 2 is the most common form of diabetes, but beneficial artificial pancreases are thus far limited to type 1 patients.

“Patients living with type 2 diabetes and kidney failure are a particularly vulnerable group and managing their condition – trying to prevent potentially dangerous highs or lows of blood sugar levels – can be a challenge,” lead researcher Charlotte Boughton said.

“There’s a real unmet need for new approaches to help them manage their condition safely and effectively.”

Why this matters: Patients who have both type 2 and kidney failure are at a higher risk of suffering from blood sugar levels that are both too high or too low, and most oral diabetes medications are not recommended for them, so maintaining insulin levels via injections is very challenging.

Unregulated blood sugar levels can lead to a host of immediate and long-term complications. Incidents of low blood sugar — hypoglycemia — can lead to blurred vision, shakiness, stress, a fast pulse, and other uncomfortable and potentially dangerous conditions; its opposite, hyperglycemia, can cause headaches, tiredness, and bladder and skin infections, among other symptoms.

Replacing the pancreas: While they have different causes, both type 1 and type 2 diabetes boil down to this: the body cannot properly regulate its blood sugar levels, because it either does not produce a hormone called insulin at all — in the case of type 1 — or does not utilize insulin correctly, as in type 2.

Artificial pancreases work by regulating the body’s blood sugar levels, standing in for the natural organ. First approved for patients 16 and older in 2016 — and recently cleared for type 1 patients as young as two — they control insulin just like your pancreas should be doing. A sensor reads the body’s blood sugar levels, sends the information to an insulin pump, which then administers the right dose of the hormone.

“And I think that there is a similar unmet need for improved glucose control and reducing the burden of diabetes management in people with type 2 diabetes who have complex insulin regimens.”

Those insulin regimens include regular blood testing — often by finger stick — and regular injections. Crucially, the artificial pancreases made these routines easier for the subjects.

“A lot of people who are on lots of different injections found it much, much easier,” Boughton told STAT.

The study: For their trial, Boughton and the researchers recruited 26 patients with type 2 diabetes who also required dialysis for kidney failure. The volunteers were randomized into two groups, with 13 receiving the artificial pancreas first and 13 starting with standard insulin therapy.

The researchers compared the amount of time that patients spent within their target blood sugar range over 20 days.

On average, artificial pancreas patients were within their target range 53% of the time, compared to 38% in the control group. This means that they had over three more hours in this ideal spot each day. The artificial pancreas also kept patients out of dangerously low blood sugar levels better than standard insulin therapy.

“Not only did the artificial pancreas increase the amount of time patients spent within the target range for the blood sugar levels, it also gave the users peace of mind,” said Cambridge’s Roman Hovorka. “They were able to spend less time having to focus on managing their condition and worrying about their blood sugar levels, and more time getting on with their lives.”

Learning by doing: The artificial pancreases actually got better over the course of the study, as the algorithm had a chance to dial in the right regimen for each patient. While they spent only 36% of their time in the target blood sugar range at the beginning of the study, that proportion increased to over 60% by trial’s end.

While further research is needed, the team hopes that these promising results in patients with the added challenge of kidney failure bodes well.

“Now that we’ve shown the artificial pancreas works in one of the more difficult-to-treat groups of patients, we believe it could prove useful in the wider population of people living with type 2 diabetes,” Boughton said.

Climate Crisis
World’s biggest direct air capture plant is trapping CO2 in Iceland
Direct air capture technology is starting to take off, with ever-larger CO2 removal facilities opening across the globe.
By Kristin Houser
Up Next 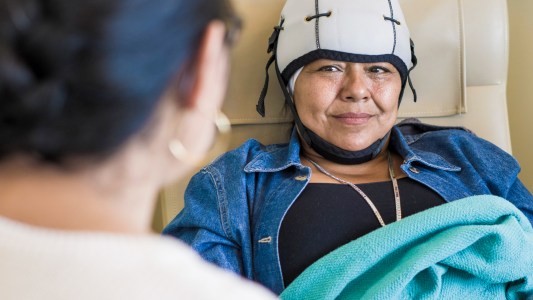 Chemo hair loss is a common side effect for cancer patients, but cooling caps can help limit the loss.