One ayahuasca experience may be all it takes to leave a lasting change on the brain, new research suggests.

The study, published in the dopely-named Journal of Psychopharmacology, found lasting changes in parts of the brain that deal with higher-order cognitive functions, like creativity, concept learning, and decision making.

Researchers took 50 subjects who had never had an ayahuasca experience before, giving some a low dose of the psychedelic and others a placebo. They took functional MRI scans — which show activity in the brain by tracking blood flow — on the day before, and the day after, the subject’s ayahuasca experience.

The scans found that “the psychedelic experience induced by ayahuasca has a lasting effect on the functional organization of brain networks supporting higher order cognitive and affective functions,” Lorenzo Pasquini, study author and postdoctoral fellow at the Memory and Aging Center at the University of California, San Francisco, told PsyPost.

Meaning, just one ayahuasca experience may impact parts of the brain concerned with complicated thinking and emotions. According to PsyPost, the research suggests ayahuasca may cause long-lasting effects on mood.

More specifically, the psychedelic concoction — long used by Indigenous tribes in the Amazon, recently co-opted by techbro types — had an impact on two regions of the brain that are concerned with introspection (perceiving sensations from inside your body, like your stomach churning), emotions, and motivational functions.

The parts of the brain concerned with the senses, meanwhile, remained unaffected after one dose.

The study is not without its drawbacks, deficiencies pretty common to the world of neuroscience and psychedelic research. 50 subjects is a pretty small sample size, and the magnetic field strength of the scanners left a little to be desired.

Like fellow psychedelics MDMA, ketamine, psilocybin, and LSD, an ayahuasca experience may prove a promising treatment for psychiatric disorders. Pasquini hopes the research may help provide a framework for further considering psychedelic therapy’s potential to treat mood and personality disorders.

“The revival of psychedelic research of the last years provides an exciting opportunity to study the clinical potential of psychedelic therapy sessions on mood disorders affecting millions of persons worldwide,” Pasquini said. 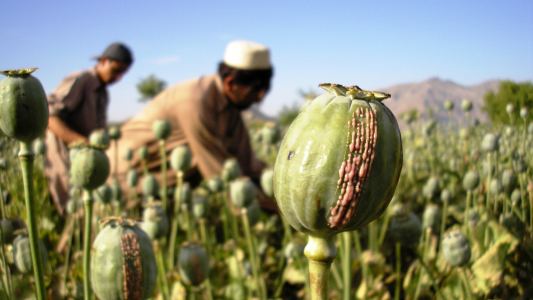 Farmers in Afghanistan are taking advantage of cheap solar panels to power the water pumps they use to irrigate crops for food and opium production.