“No need for keystrokes or voices. I created this tweet just by thinking it,” tweeted Philip O’Keefe, a 62-year-old Australian with ALS.

In a technology first, O’Keefe used a computer chip in his brain to send the first “direct-thought tweet.”

What he did: The implant didn’t require O’Keefe to undergo invasive brain surgery. Instead, in April 2020, it was installed through his jugular vein, using techniques commonly used to treat stroke.

At the time, O’Keefe had already been experiencing progressive paralysis due to ALS. By the time the brain-computer interface (BCI) was implanted, his health had deteriorated to where he could no longer do many independent activities.

“When I first heard about this technology, I knew how much independence it could give back to me,” O’Keefe said, according to a statement from Synchron, the neurotech startup behind the chip.

“The system is astonishing, it’s like learning to ride a bike – it takes practice, but once you’re rolling, it becomes natural. Now, I just think about where on the computer I want to click, and I can email, bank, shop, and now message the world via Twitter.”

Since then, O’Keefe has emailed loved ones and coworkers and played simple computer games.

​​”These fun holiday tweets are actually an important moment for the field of implantable brain computer interfaces. They highlight the connection, hope and freedom that BCIs give to people like Phil [O’Keefe] who have had so much of their functional independence taken away due to debilitating paralysis,” said Thomas Oxley, CEO of Synchron, which created the brain-computer interface.

Decoding brain waves: The brain implant, called the Stentrode, allows patients to control digital equipment wirelessly with their thoughts. Synchron’s core technology is called a motor neuroprosthesis (MNP), intended for patients who are paralyzed due to a variety of diseases.

The Stentrode is placed in a blood vessel above the motor cortex, the part of the brain involved in controlling movements. The brain-computer interface swells after it’s in place, pressing the electrodes against the vessel wall near the brain. This allows it to sense and capture neurological input, essentially decoding brain waves, and sending them as a wireless signal to the computer or a smartphone.

The Stentrode is far from the first device to decode brain waves. Last year, researchers from UC San Francisco created a speech neuroprosthesis that translated thought signals into a vocal tract and text on a computer screen, essentially giving a man with vocal paralysis the ability to speak again.

And in a study published in Nature, one paralyzed man was able to “write” up to 90 characters per minute with a brain-computer interface that decodes the brain’s signals as the person thinks about trying handwriting motions.

After O’Keefe’s initial tweet, which was posted to Oxley’s account, O’Keefe posted seven more tweets, ending his thread with, “My hope is that I’m paving the way for people to tweet through thoughts.” 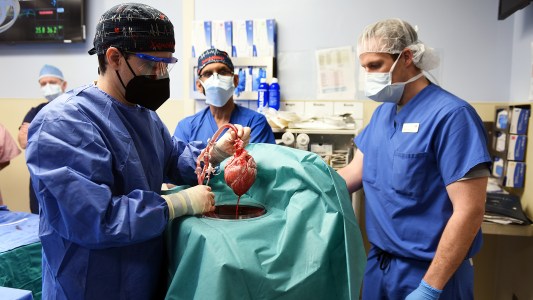 A pig heart is now beating in the chest of a man in Maryland, marking a huge step forward for xenotransplantation research.