More than 450 million people have diabetes, but nearly half don’t even know it — the disease can be asymptomatic for years, leaving people with it feeling like nothing is wrong.

Since diabetes is linked to a host of health issues, not only are these asymptomatic people not doing anything to manage their disease, they’re also unaware that they’re at higher risk of heart attacks, strokes, and even COVID-19.

Some asymptomatic people at high-risk of diabetes might opt to be screened for it, but that requires regular visits to a doctor’s office for blood testing, something that other people may find too inconvenient.

Now, UC San Francisco researchers have developed an algorithm that can detect diabetes using a measurement collected by a smartphone’s camera — no blood draw or doctor’s visit required.

An AI to Detect Diabetes

At the core of the UCSF research is a technique regularly used by smartwatches and fitness trackers to measure heart rate called “photoplethysmography (PPG).”

This technique involves shining a light onto a person’s wrist or fingertip, then recording and analyzing the color changes that take place under their skin with each heartbeat.

The algorithm can detect diabetes with about 80% accuracy.

The UCSF researchers suspected that they could use PPG to spot blood vessel damage that would also allow them to detect diabetes.

They collected nearly 3 million PPG readings from more than 50,000 people with diabetes. (The readings had been taken for a heart disease study.)

Armed with this PPG data, they developed and validated an algorithm that could detect diabetes with about 80% accuracy. When tested on people who didn’t have diabetes, it cleared between 92% and 97%.

This is comparable to the accuracy of other tests commonly used to screen for diseases such as breast or cervical cancer, according to the researchers’ study, published in the journal Nature Medicine.

The accuracy also increased when the algorithm learned other details about the patient, such as gender and age.

More research is needed to determine just how healthcare professionals could make use of the algorithm, but eventually, it could be incorporated into an app people could use at home.

“The ability to detect a condition like diabetes that has so many severe health consequences using a painless, smartphone-based test raises so many possibilities,” researcher Geoffrey Tison said in a news release.

“The vision would be for a tool like this to assist in identifying people at higher risk of having diabetes,” he continued, “ultimately helping to decrease the prevalence of undiagnosed diabetes.” 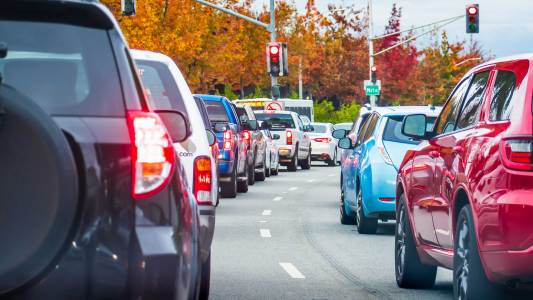 Smart traffic lights by startup NoTraffic use AI to improve the flow of traffic in cities, minimizing carbon emissions and delays for first responders.