“I think the big thing that we always emphasize is that we really understand very little about the brain,” Nako Nakatsuka says.

The connectivity and complexity of the brain, of its legion of neurons and the various neurotransmitters being shuttled between them, cascading across tiny gaps called synapses — “It’s quite scary when you think about it,” Nakatsuka says, how little we know.

But the lid of that black box is finally being pried open; recently, researchers have begun developing the tools to try and answer those big questions of what is behind our eyes.

Nakatsuka is on the forefront of developing those tools.

A senior scientist in the Laboratory of Biosensors and Bioelectronics at Switzerland’s prestigious ETH Zurich, Nakatsuka is developing impossibly small nanosensors, built out of DNA, to detect neurotransmitter activity at something close to synaptic scale.

“I think the big thing that we always emphasize is that we really understand very little about the brain.”

Her nanosensors, designed to help us understand neurodegenerative disease, have attracted the attention of MIT Technology Review, which named her to its 35 under 35 list, as well as other researchers in the field.

“I think it’s super cool!” says Ken Kishida, an associate professor of physiology and pharmacology at Wake Forest who researches neurotransmitters. Kishida, who is not involved with Nakatsuka’s work, began his college career studying genetics, fascinated by what DNA could encode.

“It’s really cool to see how the structure … of DNA molecules has been capitalized on for molecular engineering,” Kishida says.

Understanding neurotransmitters: Neurotransmitters are the currency of the nervous system, the molecules neurons use to communicate with each other, including A-list chemicals like dopamine, serotonin, and norepinephrine.

Fluctuations in neurotransmitter levels are associated with many neurological disorders, like the dopamine deficits in Parkinson’s disease, says Krishna Vadodaria, the associate director for neurobiology at Engrail Therapeutics.

“Many drugs target neurotransmitter systems, for example, the class of antidepressants called ‘selective serotonin reuptake inhibitors,’” like the popular SSRI citalopram, Vadodaria says via email. (One I’m intimately familiar with, including its blunt and mysteriously effective ways.)

Vadodaria and Nakatsuka put the nanosensors to the test by conducting a study looking at serotonin and SSRIs in the lab of Rusty Gage, at La Jolla’s Salk Institute for Biological Studies, where Vadodaria was a staff scientist at the time.

While we understand some aspects of the brain well, our grasp of neurotransmitters is lacking, especially considering their assumed importance in brain function. Studying them inside the brain is difficult, if only for the obvious problem of getting in there, but they can be tricky to measure even in neurons in the lab, too.

Neurotransmitters are made to work in a very localized area — the synapses — Vadodaria explains.

And while neurotransmitter levels are high in this miniscule space, they become diluted in the medium that the cells are in, which makes measuring them difficult. Serotonin has the added difficulty of being an unstable molecule, degrading easily and susceptible to heat.

But researchers are beginning to gather a better understanding of neurotransmitters inside a human brain, thanks to new ways to measure them.

Kishida, Virginia Tech researcher Read Montague, and their colleagues took the first measurements of dopamine in an awake, conscious, human brain in 2009.

Their technique, which piggybacks on brain surgeries to drop a probe in and read neurotransmitters via electrical signals — parsed by a complex machine learning algorithm — has begun to reveal insights, like the potential function of dopamine and serotonin in perception and decision making.

In her Molecular Psychiatry study with Vadodaria, Nakatsuka’s nanosensors, which use a completely different method to measure the presence of neurotransmitters, found evidence that neurons differentiated to respond to serotonin in a dish actually can secrete serotonin and respond to SSRIs as predicted, a potential new model for serotonergic research which has “long been restricted to animal models,” the researchers wrote in their study.

Using DNA, the nanosensors can detect neurotransmitters by changing shape in their presence.

Big questions, small sensors: Nakatsuka’s group is currently focused on taking those kinds of in vitro measurements, working with cells and brain tissue slices, rather than inside the skull of a living thing.

“We really simplify the brain, and just interrogate one to a few hundred brain cells to start to ask really basic questions,” Nakatsuka says. How does one neuron communicate to another? How can we influence those communiques?

“Of course, while it’s a very simplified system, I think that it’s just such a black box still that these are the ways where we can start to ask different questions from in-brain measurements.”

To measure neurotransmitters, Nakatsuka turned to DNA. In addition to encoding proteins, DNA can change its structure around when it gloms onto a specific molecule. Because DNA has a structure it favors depending on its environment, it will snap back to that form when the molecule it was binding to is no longer present.

Called “DNA aptamers,” these are the key to the nanosensors.

First, the DNA aptamer is engineered to bind to a specific neurotransmitter — say, serotonin. When serotonin is present, the DNA aptamer binds to it, changes shape, and increases electrical current flow. By reading these differences in electrical current as the aptamer changes shape and changes back, the nanosensors can give a reading of neurotransmitter levels.

The aptamers can be engineered to bind to different molecules, making the nanosensors multifunctional — swap ‘em out and measure something new.

“[The sensors are] really starting to approach the dimensions of the neuron and where it communicates.”

Armed with her tiny measuring device, Nakatsuka turned to getting her probe where it needed to be — at a scale approaching that of the synapse itself. The aptamers were loaded into nanoscale pipettes — approximately 10 nanometers at the tip.

“It’s really starting to approach the dimensions of the neuron and where it communicates,” Nakatsuka says. And that scale is important; the smaller you get, the more you can increase the spatial resolution, or the smallest thing the sensor can accurately measure. (Getting it into the synapses accurately, however, is a current challenge.)

“The more the technology can move in that direction, it just opens up different ways of asking questions,” Kishida says.

Next steps: While the nanosensors passed a real world test in being able to measure serotonin in the Salk study, there’s still plenty of work to be done and possible problems — and opportunities — to tease out.

Currently, the nanosensors measure on the order of seconds. The aptamers can be tuned for increased speed, however; Nakatsuka thinks milliseconds are possible, eventually.

Because DNA is a biological molecule and degrades, the researchers will also need to find out if their aptamers will eventually fall to pieces. Currently, they seem to hold together in dishes and tissue samples for weeks to months, but longer-term duration still needs to be figured out.

There is also the question of if using a biological sensor can have an impact in biological environments and how well they will work in them. Nakatsuka has begun using the nanosensors in brain tissue samples, ratcheting up the complexity from in vitro neurons.

She envisions the nanosensors being used in the lab to help provide a basic understanding of how neurotransmitters work, like how drugs interact with them, with researchers like Vadodaria and Kishida using her new tools to answer — and ask — new questions.

“It’s a really exciting development in neurotransmitter sensors,” Kishida says. “It seems like there’s a lot of potential there to develop new ways of investigating.”

Editor’s note: This story was updated 10/3/2022 to correct a misspelling of Nako Nakatsuka’s name. 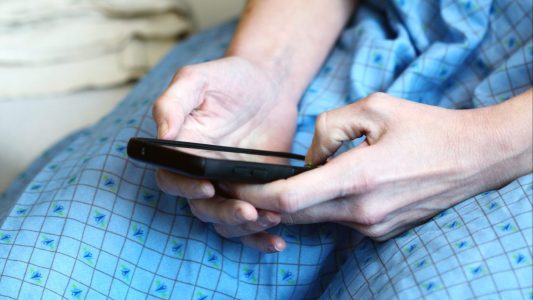 A new review finds that 14 different cancers, including eight related to the digestive system, are increasing in people under age 50.

Healthcare
What’s causing the alarming rise in cancer for adults under 50?
Subscribe to Freethink for more great stories
Subscription Center
Sections
Video
Freethink
Subscribe
We focus on solutions: the smartest people, the biggest ideas, and the most ground breaking technology shaping our future.
Subscribe