Google’s parent company, Alphabet, has announced the launch of Isomorphic Labs, an AI-driven drug discovery company, built on research from its DeepMind subsidiary.

“For over a decade DeepMind has been in the vanguard of advancing the state-of-the-art in AI,” Demis Hassabis, founder and CEO of both Isomorphic Labs and DeepMind, wrote in a blog post.

“We are at an exciting moment in history now where these techniques and methods are becoming powerful and sophisticated enough to be applied to real-world problems,” he added, “including scientific discovery itself.”

The challenge: Drug discovery starts with scientists identifying potential treatment targets — typically proteins or genes linked to a disease. They’ll then look for a molecule or compound that affects or “hits” that target.

Drug discovery takes, on average, more than 10 years and $2.8 billion per drug.

A recent example of this was the identification of the spike protein on the coronavirus as a target for COVID-19. This led to the discovery of vaccines and monoclonal antibodies that can stick to the spike and neutralize it.

The problem with this approach to drug discovery is that it usually takes on average more than 10 years and $2.8 billion per drug. Most diseases aren’t like COVID-19, with one big, clear target with well-known weapons, like antibodies, to hit it. There may be thousands of potential candidates and identifying promising ones is largely a process of trial and error.

AI-driven drug discovery: AI has emerged as a way to speed up drug discovery. Trained systems can look at a treatment target and then identify promising drug candidates from a library of options far more quickly than scientists in a lab.

This isn’t just a theory Alphabet is banking on, either — we’ve already seen examples of it in action.

An AI developed by U.K. company Exscientia, for example, discovered an anticancer molecule that’s now heading into clinical trials — and it did so in just eight months. Without the AI, that discovery would have likely taken 4 to 5 years.

The cold water: AI might be able to help us quickly identify candidates that look promising on a molecular level, but that’s just one aspect of drug discovery — those candidates will still need to prove themselves in lab tests, animal trials, and human trials.

“The laborious, resource-draining work of doing the biochemistry and biological evaluation of, for example, drug functions [will remain],” Helen Walden, a professor of structural biology at the University of Glasgow, told the Verge with regards to AI’s use in drug discovery.

Looking ahead: Isomorphic Labs will reportedly collaborate with DeepMind researchers, when appropriate, but will also operate independently. It is now looking to staff up with biologists, chemists, AI experts, and more to help it meet its lofty goal.

“Isomorphic’s mission could not be a more important one: to use AI to accelerate drug discovery, and ultimately, find cures for some of humanity’s most devastating diseases,” Hassabis wrote. 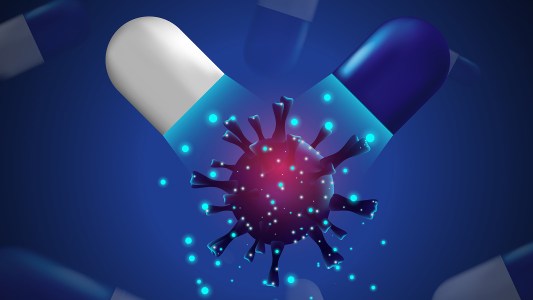 Pfizer’s antiviral pill to treat COVID-19 cut the risk of hospitalization or death by 89%, according to early results from a phase 2/3 trial.