MIT researchers have discovered a molecule that could prove invaluable in the battle against antibiotic resistance — and they did so with the help of an artificial intelligence algorithm.

Antibiotics are drugs that prevent and treat bacterial infections, and the discovery of the first one — penicillin — in 1928 changed the world. Finally, doctors had a way to treat the pneumonia, rheumatic fever, and other bacteria-caused health problems that previously amounted to a death sentence for many patients.

“Bacteria are locked in an evolution race with antibiotics, constantly evolving new ways to avoid their impact.”

In recent years, a new problem has emerged: antibiotic resistance. Many once-treatable infections no longer respond to antibiotics because exposure to the drugs has allowed the bacteria to develop new resistance mechanisms.

Right now, the superbugs are winning that race — but MIT’s newly developed AI could close the gap.

The problem with developing new antibiotics is that the process is both costly and time-consuming. Additionally, many “new” antibiotics aren’t really all that different from existing ones, meaning bacteria can quickly develop resistance to them.

Based on the new MIT study, which was published in the journal Cell, a development process centered on AI could avoid those existing pitfalls.

Some of the MIT team had previously developed machine-learning computer models that could  analyze the structure of a chemical compound to predict whether it might possess certain traits.

For this new study, they decided to apply that type of model to antibiotic discovery.

The first step was training a model to identify molecules effective at killing bacteria, specifically E. coli. This involved feeding it data on 2,500 molecules, a mix of FDA-approved drugs and natural products.

After training the computer model, the MIT team set it to work analyzing an open-access library containing approximately 6,000 compounds, looking for any predicted to have strong antibacterial properties — and it identified a molecule with a chemical structure unlike any known antibiotic.

After another machine-learning model predicted that the molecule was unlikely to be toxic in humans, the team gave it a name — halicin — and set to work on testing its antibacterial abilities.

Halicin Is a Powerful Antibiotic

The MIT researchers started by growing strains of dozens of bacteria, including several they knew were resistant to antibiotics, in lab dishes. When they then introduced halicin to the bacteria, they found it could kill all but one hard-to-treat pathogen.

“Any method that can speed early-stage drug discovery has the potential to make a big impact.”

Even after 30 days of treatment, their samples of E. coli never developed any resistance to halicin, though the bacteria did develop resistance to another antibiotic in just one to three days.

When the team used halicin to treat mice infected with an antibiotic-resistant bacteria — either C. diff or A. baumannii — it completely cleared their infections

“We wanted to develop a platform that would allow us to harness the power of artificial intelligence to usher in a new age of antibiotic drug discovery,” researcher James Collins said in a news release. “Our approach revealed this amazing molecule which is arguably one of the more powerful antibiotics that has been discovered.”

More Promising Discoveries on the Horizon

Not content with just halicin, the MIT team later tasked their AI with screening 100 million molecules in another online library of chemical compounds. Within just three days, it identified 23 promising candidates, and through lab tests, the researchers found that two were especially potent against bacteria.

The MIT researchers are now looking for pharmaceutical companies or nonprofit organizations to partner with for the development of new antibiotics. This search might not be too hard given that their study is already earning praise from others in the field, including Jacob Durrant, who runs a lab focused on computer-aided drug design at the University of Pittsburgh.

“The work really is remarkable,” he told The Guardian.

“It would be impossible to physically test over 100 million compounds for antibiotic activity,” he continued. “Given typical drug-development costs, in terms of both time and money, any method that can speed early-stage drug discovery has the potential to make a big impact.” 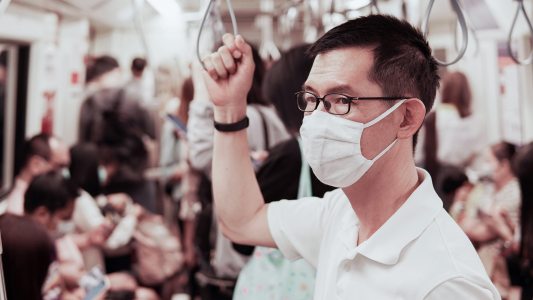 China is using its vast surveillance network and near-total control over citizens to respond to the COVID-19 coronavirus outbreak in a way perhaps no other nation could.

Coronavirus
China is responding to the coronavirus in a way only China could
Subscribe to Freethink for more great stories
Subscription Center
Sections
Video
Freethink
Subscribe
We focus on solutions: the smartest people, the biggest ideas, and the most ground breaking technology shaping our future.
Subscribe