A new epilepsy treatment that uses the brain’s natural seizure-prevention mechanism could help millions of people — if the results of a mouse study can translate to humans.

Epilepsy 101: In a healthy brain, tiny electrical impulses travel along neurons in an orderly fashion. In the brains of people with epilepsy, this rhythm is repeatedly disrupted by sudden bursts of uncontrolled electrical activity.

These are called seizures, and their effects vary widely — some people will stare or become confused during a seizure, while others might lose consciousness or experience uncontrollable muscle spasms.

About 40% of people with epilepsy have seizures that fail to respond to treatment.

Around 3.4 million people in the US have epilepsy, making it one of the most common neurological diseases. While it can have genetic causes, it can also be caused by traumatic brain injuries and neurodegenerative diseases, like Alzheimer’s. In some cases, there’s no known cause.

Many are able to get their seizures under control with medications or therapies, but about 40% of people with epilepsy have seizures that fail to respond to treatment. Uncontrolled seizures can lead to injuries, brain damage, and cognitive impairment, so there’s an urgent need for new treatments.

What’s new? Researchers at Georgia’s Augusta University have developed a new kind of epilepsy treatment, which reduced excessive electrical activity in the brains of mice. The drug, delivered as a nasal spray, was tested on animal models of epilepsy and Alzheimer’s.

If the results translate to humans — always a big “if” — the treatment could potentially prevent seizures from happening. And because it can be delivered as a nasal spray, the treatment might also be used as a “rescue” med to interrupt prolonged seizures or seizure clusters.

Release the brake: The epilepsy treatment, called A1R-CT, is a peptide named after a receptor on nerve cells, called “adenosine 1” (A1).

When this receptor is activated, it makes neurons less likely to fire, calming the nervous system’s electrical activity.

This ability has made the A1 receptor a promising target for epilepsy treatments. The problem is that AI is found on nerve cells throughout the body, including other major organs, so medications to activate it are likely to produce a lot of unwanted side effects.

The treatment reduced electrical activity in the brains of mouse models without affecting nerves elsewhere in their bodies.

Because overactive A1 receptors would reduce brain activity so much we’d fall asleep, the body produces chemicals to regulate them, too. The researchers discovered that one of those chemicals — the protein neurabin — is mainly present in the brain.

By designing their peptide to interfere with the neurabin/A1 interaction, they were able to remove the brake on the brain’s A1 receptors. This reduced electrical activity in the brains of their mouse models without affecting nerves in the rest of the animals’ bodies.

Looking ahead: The epilepsy treatment is still in the early stages of development — the researchers plan to continue refining their peptide and experimenting with different doses and delivery times.

If the results of the animal study make it into clinical trials, the nasal spray might one day provide millions of people with a new way to prevent their seizures — or bring them to a halt. 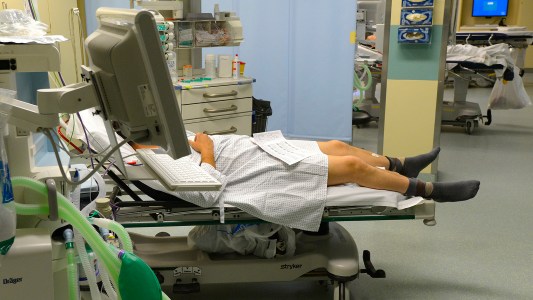 Medicine
A sepsis-catching AI has proven effective in hospitals
By B. David Zarley
Subscribe to Freethink for more great stories
Subscription Center
Sections
Video
Freethink
Subscribe
We focus on solutions: the smartest people, the biggest ideas, and the most ground breaking technology shaping our future.
Subscribe