Alzheimer’s is a cruel disease. It robs people of their memories and cognition, often progressing to the point that they can no longer recognize their loved ones — a development distressing for patients and their families.

It is also one of the leading causes of death in the United States, killing over 134,000 people in 2020 — a number that has been growing as the population ages.

At least 10% of people over the age of 65 currently have Alzheimer’s, and the risk of developing the disease increases with age. A cure could prevent hundreds of thousands of deaths and improve the lives of millions of patients, not to mention families and caregivers.

In the hunt for a cure, researchers are turning to revolutionary gene-editing technology CRISPR.

The challenge: There is evidence that Alzheimer’s may be developing in the brain as much as 30 years before symptoms appear, but there isn’t a way to easily and accurately diagnose it that early — and by the time a person starts showing symptoms, the disease may be too advanced for treatments to be effective.

Treating brain diseases is also always difficult because of something called the “blood-brain barrier.” This wall of cells is designed to prevent toxins and pathogens from getting from the blood into the brain — but it also makes it hard to get treatments into the brain.

People with the Icelandic mutation are five times more likely to reach their 85 birthday without an Alzheimer’s diagnosis.

The Icelandic variant: Scientists have identified a couple of differences between the brains of people with Alzheimer’s and those of healthy people.

One is the heavy buildup of “amyloid plaques” — clumps of toxic, misfolded proteins that collect between neurons, leading to cellular damage and death. They form when the amyloid precursor protein (APP) is broken down by an enzyme.

In 2012, researchers studying the genes of people in Iceland discovered a rare mutation in the APP gene that makes it harder for the enzyme to break apart the precursor protein. As a result, people with the mutation have “strong protection” against Alzheimer’s, as well as general cognitive decline and memory loss.

People with this mutation are “five times more likely to reach 85 without being diagnosed with Alzheimer’s,” according to Nature, and “also live longer, with a 50% better chance of celebrating their 85th birthday.”

Researchers at Canada’s University of Laval have now used a CRISPR technique known as “prime editing” to successfully insert the Icelandic mutation into up to 68.9% of human cells treated in the lab.

This mutation likely wouldn’t be able to help anyone already experiencing a significant build up of amyloid plaques in their brain, but its insertion could be useful as a treatment in the disease’s early stages or as a preventative measure for those at very high risk of developing Alzheimer’s.

“The challenge now is to find a way to edit the genome of millions of brain cells.”

Looking ahead: For the CRISPR treatment to be effective, it would need to edit the genes in a significant portion of the brain’s cells, and CRISPR faces the same issue as other treatments in crossing the blood-brain barrier.

“The challenge now is to find a way to edit the genome of millions of brain cells,” lead author Jacques-P. Tremblay said. “We are looking at different possibilities, including the use of non-infectious viruses, to deliver the editing complex inside neurons.”

The team now plans to see if they can edit the mutation into the brains of animals with Alzheimer’s. If those studies go well, they hope to conduct a small study in people whose genes make them likely to develop Alzheimer’s before the age of 40.

Lingering questions: That first human study would mainly be looking at safety, since gene editing — and doing anything in the brain — has significant risks.

Even if researchers can safely edit people’s brain cells, we don’t know for sure that this mutation will prevent them from developing Alzheimer’s — the disease is linked to other changes in the brain, too, such as the formation of “tau tangles.”

In fact, researchers still aren’t certain that any of these changes in the brain actually cause Alzheimer’s — they might just be symptoms of it, and if that’s the case, stopping them might not actually prevent the disease.

More than 40 genes have been linked to Alzheimer’s, giving us many potential targets for CRISPR therapies.

The big picture: While the Icelandic mutation is the only one known to decrease the risk of Alzheimer’s, more than 40 other genes have been linked to the disease, and as the cost of genome sequencing continues to go down, we’ll likely discover more in the future.

So even if inserting this beneficial mutation doesn’t stop Alzheimer’s, using gene editing to remove high-risk mutations could still be on the table.

CRISPR and other gene-editing technology are also getting more advanced, meaning researchers might not have as much difficulty editing larger numbers of brain cells or preventing off-target edits in the future. 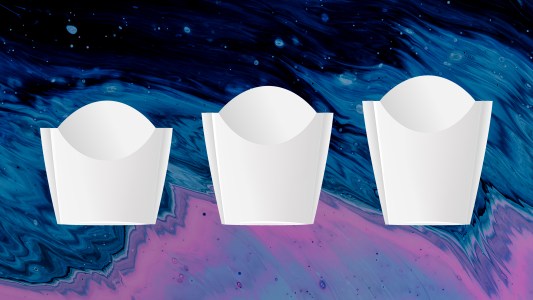 A new study suggests that people appear to benefit from a moderate calorie restriction the same way we know many animals do.

Aging
Why calorie restriction may be the key to a healthier life
Subscribe to Freethink for more great stories
Subscription Center
Challenges
Video
Freethink
Subscribe
We focus on solutions: the smartest people, the biggest ideas, and the most ground breaking technology shaping our future.
Subscribe