A single genetic mutation on a specific gene causes many cases of FAD, making it a prime target for gene therapy — using DNA or RNA to change how the genes work. Gene therapy can replace faulty parts of the genetic code, cut out parts that cause disease, or turn gene expression up or down, creating more or less of a protein.

But despite knowing the mutation responsible, and even being able to test for the gene before symptoms arise, we do not yet have a way to edit out the gene that causes FAD. The difficulties with getting into the brain and changing enough cells to make a difference has frustrated many gene therapy attempts.

Despite knowing the genetic mutation that causes it and being able to test for said gene, we don’t have gene therapy for familial Alzheimer’s diseases.

Now, researchers at the Hong Kong University of Science and Technology (HKUST), Cal Tech, and the Shenzhen Institute of Advanced Technology have developed a new technique that allows for brain-wide gene editing.

Delivered into the brains of mice engineered to have FAD-related mutations, the gene editing tool, published in Nature Biomedical Engineering, fixed the mutations across the entire brain and appeared to treat Alzheimer’s symptoms.

“As the first demonstration of efficient brain-wide genome editing to alleviate Alzheimer’s disease pathology throughout the whole brain, this is really an exciting development,” Nancy Ip, research team lead and a neuroscientist at HKUST, said.

The brain problem: Gene editing technology — like CRISPR — allows for, well, the editing of genes. (I love science terms that say what they mean.)

A host of diseases are connected to genetic problems: a mutation may cause the body to stop creating a certain important protein or make too much of it. Because gene editing allows for the precise tweaking of the genetic code itself, it has the potential to actually cure genetic diseases.

Part of the problem is the tricky business of getting things working right in the brain. Even if we know that a certain, single genetic mutation can cause a form of dementia, fixing it may not be as easy as flipping a switch “off” or “on.”

Some proteins need to operate within a certain range — not too much and not too little — inside the brain, and that’s a level of control currently hard to ascertain. You’ve got to Goldilocks it.

Plus, to treat a condition like Alzheimer’s, which affects huge areas of the brain,we’d need brain-wide gene editing.

“The brain-wide aspect is also very important,” Ip told the South China Morning Post. “A disease like Alzheimer’s doesn’t just affect a small region of the brain, so we need to have brain-wide genome editing to modify different brain regions.”

It’s hard to edit the genome at all, and it’s even harder to edit every single cell among the hundreds of billions in the brain.

Making things even more difficult is a layer of cells that are very picky about what they allow in the brain — like, nightclub-door-guy picky. Called the blood-brain barrier, these cells make getting molecules into the brain extremely difficult — we often need to resort to just cutting open the skull and putting stuff directly in the brain, a blunt, effective, and fairly dangerous solution.

Drilling holes into every FAD patient isn’t ideal, however. If brain-wide gene editing is to become a treatment for genetic diseases, it needs to be able to enter through the brain’s front door.

These tiny viruses can be emptied out of their original DNA to work like couriers, carrying things into the body. When they infect cells, instead of inserting instructions for making more viruses, they deliver their human-programmed payload.

Tiny viruses carried a gene editing tool and instructions to snip the Alzheimer’s mutation across the blood-brain barrier.

In this case, the viruses were carrying instructions for a gene editing tool called Cas9 and a piece of RNA that guides the Cas9 scissors right to the FAD mutation.

When the scientists injected the viruses into the bloodstream of mice engineered to have Alzheimer’s, they were able to cross the blood-brain barrier and, even more impressively, achieved brain-wide gene editing. The FAD-associated mutations were disrupted throughout the brain, treating Alzheimer’s effects on their brain.

“Our work actually makes it possible to have high enough efficiency, hence we were able to observe” changes in the brains, Ip told the SCMP.

The researchers also found that their brain-wide gene editing technique kept the amount  of a protein called amyloid low in the mouse brains for six months after one treatment (that doesn’t sound like much, but it’s roughly ⅓ of their lives).

Amyloid is the focus of the main theory behind what causes Alzheimer’s. The idea is that amyloid “plaques” build up in the brain and choke off communication between the brain cells. The plaques also rouse the immune system, which causes inflammation; eventually, the cells begin to die. (The theory is the reasoning behind the FDA’s controversial approval of a new Alzheimer’s drug that breaks up the plaques; it may also be wrong.)

But the finding does suggest that the brain-wide gene editing could have lasting effects.

The next steps: As with anything in medicine, it’s a long, tough, obstacle-strewn road to go from mice to people; going from rodent to clinic is less of a sprint, more like a steeplechase.

Ip predicts that human trials are still five to ten years away, but believes the work has laid a foundation for brain-wide gene editing to treat genetic disorders in the future, including Alzheimer’s, Parkinson’s, and ALS.

“With this proof of concept, other research labs can attempt to tackle different hereditary diseases to see if this brain-wide genome editing technology can also be applicable,” Ip told the SCMP.

“If we know exactly which gene mutation will result in the defects that lead to a neurodegenerative disease, we can apply the same principle. It’s just working on a different gene.” 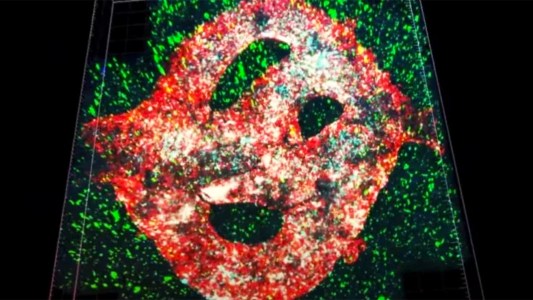 3D Printing
Researchers have 3D-printed an active tumor
By B. David Zarley
Subscribe to Freethink for more great stories
Subscription Center
Sections
Video
Freethink
Subscribe
We focus on solutions: the smartest people, the biggest ideas, and the most ground breaking technology shaping our future.
Subscribe