A chemical in grape seeds can extend the lives of older mice, make younger ones healthier, and even help chemo drugs with shrinking tumors, according to a new study in Nature Metabolism.

But is it the anti-aging breakthrough humans have been hunting for? And what, if anything, does it tell us about why we age?

Making ​​senescence: Disease, injury, and other stressors can damage our cells, preventing them from being able to divide and multiply. However, those dysfunctional cells can still cause inflammation and harm the cells around them.

To prevent that, our immune systems kill and clear damaged cells through a process called “apoptosis.” But some cells resist apoptosis. They’re called “senescent cells,” and we accumulate more of them as we age.

The idea: Senescent cells have been linked to a number of age-related disorders, including cancer, dementia, stroke, and more, so longevity researchers are now looking for “senolytics” — drugs that can clear the body of senescent cells without harming healthy ones.

The hope is that such drugs will allow us to live longer, healthier lives, and several promising candidates have made it to human trials. Now, researchers from the Chinese Academy of Sciences think they’ve identified a cheap, readily available new senolytic target — in grape seeds.

Grape escape: For their study, the researchers screened a library of 46 plant-derived compounds, previously linked to aging, to see if they affected senescent cells in a petri dish.

Senescent cells have been linked to many age-related disorders, including cancer, dementia, and stroke.

The researchers moved on to study its effect on mice and found that it increased their lifespans, improved their health, and decreased the number of senescent cells in the animals’ tissues.

The details: For one experiment, 91 old mice were treated with PCC1 twice a week for the rest of their lives. The remaining lifespans of those mice were more than 60% longer than mice in a control group, while their total lifespans were 9% longer.

A similar test was performed with younger mice, and those treated with PCC1 for four months were more fit than those given a control — they were faster, stronger, and had more endurance.

Finally, mice with human prostate cancer tumors given PCC1 and a chemotherapy drug saw their tumors shrink by an average of 75% while the tumors of mice given just the chemo shrank by only 44%.

The number of senescent cells around the tumors also decreased.

Looking ahead: The usual disclaimer applies here: just because something works in mice doesn’t mean it’ll work in humans. However, grape seeds are fairly cheap, so if PPC1 does translate to people, a senolytic drug based on it may be easy to scale up.

Even if PPC1 can’t make the leap to humans, though, this study suggests that longevity researchers targeting senescent cells may already be on the right track. And if there’s a PCC1 for mice, there may well be a similar compound that does work in people. 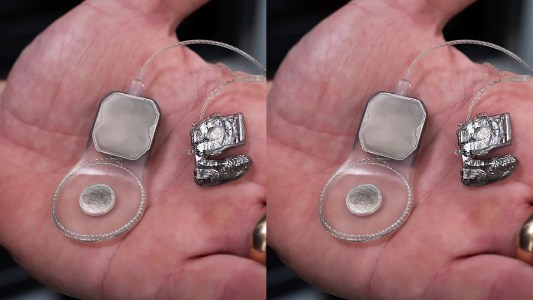 An experimental bionic eye designed to help restore vision in people with retinal degeneration is ready for human trials.