The FDA has approved the first HIV prevention injection, allowing people at risk to protect themselves with just one injection every two months. The shot was found to work even better than a daily pill regimen at preventing HIV.

The challenge: For the past 10 years, people at risk of contracting HIV have had the option of reducing the chance of infection by taking a type of medication called “pre-exposure prophylaxis” (PrEP).

When taken every day, PrEP meds are highly effective, reducing the risk of HIV from sex by 99%. But perfect adherence to the schedule is difficult — in the real world, people miss days here or there, or forget to refill their prescriptions, leading to gaps in protection.

“This injection, given every two months, will be critical to addressing the HIV epidemic in the U.S.”

The idea: A new PrEP med, brand name Apretude, requires just six shots a year, rather than a daily pill. The injection, made by GlaxoSmithKlein, has now been approved by the FDA for high-risk people.

“This injection, given every two months, will be critical to addressing the HIV epidemic in the U.S., including helping high-risk individuals and certain groups where adherence to daily medication has been a major challenge or not a realistic option,” Debra Birnkrant, director of the FDA’s Division of Antivirals, said in a statement.

How it works: The HIV prevention injection is approved for at-risk adults and adolescents weighing at least 77 pounds. The treatment starts with two injections delivered a month apart before moving to an every-other-month regimen.

Those who are concerned about side effects can opt to take the med in the form of a daily pill for a month before transitioning to the injections.

The trials: Prior to approving Apretude, the FDA reviewed data from two trials in which more than 7,000 people were given either the HIV prevention injection or another PrEP med (Truvada), which is a daily pill.

Among gay men and transgender women who have sex with men, patients who got the shots had 69% lower risk of contracting HIV, even compared to those who took Truvada (which itself already greatly reduces the risk compared to those not on PrEP).

Cisgender women who got the injection had 90% lower risk of contracting HIV compared to the daily pill.

The caveats: People given Apretude did experience more side effects — headaches, fever, fatigue, etc. — than those given Truvada, so that might deter some people from switching to the HIV prevention injection.

Another barrier to adoption could be cost. The government requires most insurance plans to cover Truvada and Descovy (another daily oral PrEP), but there’s currently no requirement for Apretude, and each shot has a sticker price of $3,700.

According to the Men’s Health Foundation, it usually takes a few months for insurance companies to decide whether (and how much) to cover a new drug, and Apretude coverage will probably vary by individual plan.

The big picture: It’s possible that insurers will be required to pay for the HIV prevention injection in the future, but even if they aren’t, the lower risk of contracting HIV (and its associated medical costs) with the shots may encourage them to cover it anyway.

Either way, the FDA approval means people who can afford the drug now have another way to protect themselves against infection.

More such shields could be just on the horizon, too, as several HIV vaccines are in development, including ones based on the same mRNA tech behind the COVID-19 vaccines.

We may even be closing in on a cure for people who are HIV-positive.

In 2021, the FDA cleared a promising CRISPR-based treatment for human trials — it uses the gene-editing system to cut the virus out of cells where it is hiding. And the recent discovery of a second person whose body naturally eliminated the virus could point to another way to cure the disease, too. 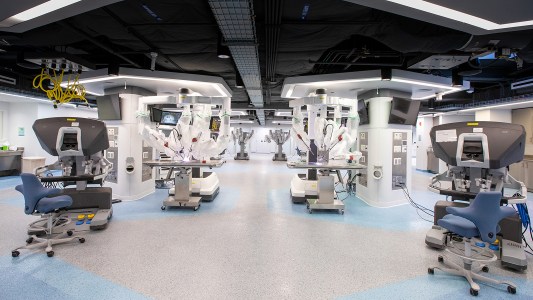 Chicago’s Surgical Innovation Training Lab is developing the robots, surgeons, and digital surgeries of the future.

Surgery
This robotics lab wants to develop the dream surgery
Subscribe to Freethink for more great stories
Subscription Center
Sections
Video
Freethink
Subscribe
We focus on solutions: the smartest people, the biggest ideas, and the most ground breaking technology shaping our future.
Subscribe