Los Angeles-based startup Bionaut Labs is developing micro-sized medical robots that are guided through the body by magnets — and by 2024, they could be helping extend the lives of children with inoperable brain tumors.

The challenge: Nearly one billion people worldwide live with a neurological disorder — ranging from migraines and dyslexia to epilepsy and Alzheimer’s — and treating these issues by targeting the brain can be extremely difficult.

In cases where medication might help, we run into the problem of the “blood-brain barrier” — this natural defense is designed to keep microbes in the blood out of the brain, but it makes it hard for medications to enter the brain, too.

Increasing dosages to get more of a medication into the brain isn’t an option for many treatments, either — since oral and IV drugs have to travel through the body to reach the brain, larger doses could potentially lead to intolerable side effects in other organs.

Nearly one billion people worldwide live with a neurological disorder.

The idea: Bionaut Labs’ tiny medical robots are designed to solve these issues.

Each “bionaut” is about the size and shape of half a grain of rice. Once inserted into the brain via a needle, computer-controlled magnets outside a patient’s skull can be used to steer the tiny metal bot around the brain.

Once it’s no longer needed, the bot can be guided right back out through a needle.

Multipurpose bots: Bionaut Labs envisions its medical robots being used for a slew of applications.

A major one is drug delivery — a bionaut could be loaded with a medication and then triggered to release it directly where needed in the brain, potentially increasing efficacy without causing the side effects linked to systemic administration.

With tweaks to their design, the medical robots could also be used to perform surgical procedures, deliver electrical stimulation, monitor biological processes, or collect tissue or fluid samples.

Human clinical trials of bionauts are expected to begin in 2024.

Looking ahead: On November 28, Bionaut Labs announced that it had raised $43.2 million, bringing its total financing up to $63.2 million. It plans to use that funding to advance development of its two lead programs.

One is the use of the medical robots to deliver a chemo drug to brainstem gliomas, which occur primarily in children and adolescents and are inoperable due to their location. The other is the use of bionauts to pierce brain cysts linked to Dandy-Walker syndrome, a rare pediatric disorder.

Both programs are in the preclinical stages, with human clinical trials expected to begin in 2024.

“There has been a dearth of innovation around treatments for conditions that cause tremendous suffering, in large part because past failures have discouraged even the best of researchers,” said CEO Michael Shpigelmacher.

“Bionaut Labs remains committed to finding new ways to treat these devastating diseases, which are long overdue for a breakthrough,” he continued. 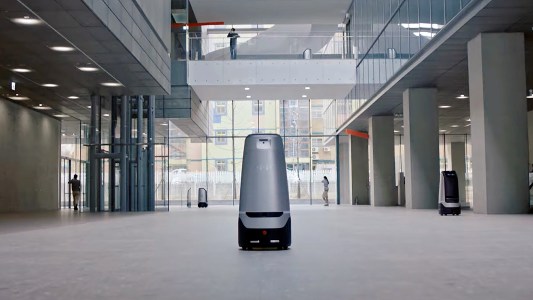 Tech giant Naver Corporation designed its new headquarters, 1784, to be a “robot-friendly” testing ground for its latest technologies.