This proof-of-concept study from scientists at Penn is something straight out of science fiction: tiny, shapeshifting microbots that could automatically brush and floss your teeth for you.

The tiny bots, made from iron oxide nanoparticles, can be controlled by magnets to take on various shapes, including bristle-like forms, for brushing away bacteria and plaque, or thin lines, to act like floss.

The tiny bots can be controlled by magnets to take on various shapes, including bristle-like forms, for brushing away bacteria and plaque, or thin lines, to act like floss.

“You have to brush your teeth, then floss your teeth, then rinse your mouth; it’s a manual, multistep process,” said Hyun (Michel) Koo, a professor in Penn’s School of Dental Medicine and the study’s co-corresponding author.

“The big innovation here is that the robotics system can do all three in a single, hands-free, automated way.”

The importance of oral care: Brushing, flossing, and rinsing is not all cosmetic, for white smiles and fresh breath — proper oral hygiene stems off tooth decay and gum disease.

Brushing and flossing remove bacteria from the teeth that can form plaques. When these bacteria come into contact with sugar — as they do so often with modern diets — they produce acids that eat away at the tooth’s enamel, weakening it.

Brushing generally removes the bacteria from the broad surfaces of the teeth, flossing cleans out the areas in between the teeth, and mouthwash kills bacteria.

Maintaining consistent oral care habits is challenging enough for most people, but they pose a special challenge for people suffering from conditions like arthritis. Seniors and people with disabilities also may have a difficult time brushing, flossing, and rinsing.

“We have this technology that’s as or more effective as brushing and flossing your teeth but doesn’t require manual dexterity,” Koo said. “We’d love to see this helping the geriatric population and people with disabilities.”

Both groups were investigating iron oxide nanoparticles. Koo’s dental group was interested in the nanoparticles’ ability to generate free radicals, which can kill bacteria and break apart plaque biofilms.

The engineering group, meanwhile, was researching how to use the nanomaterial to create magnetically-controlled nanobots.

Working together, they created the tooth-cleaning microbots that can “rapidly adjust their shape, length, and stiffness,” the researchers wrote, which allows them to adhere to the irregular surfaces of teeth.

“It doesn’t matter if you have straight teeth or misaligned teeth, it will adapt to different surfaces,” Koo said. “The system can adjust to all the nooks and crannies in the oral cavity.”

The team was able to control not only the microbot’s shape but also finer grain features like the length and and stiffness of the bristles, allowing them to be strong enough to clean but soft enough not to damage the gum.

The microbots were initially tested on a tooth-like material, before moving on to 3D-printed tooth models based on scans of human teeth, and, eventually, real teeth, mounted in such a way as to mimic their position in the mouth.

Further refinement of the motions and the best way to get them to your teeth will need to be developed before the microbots can be used clinically. 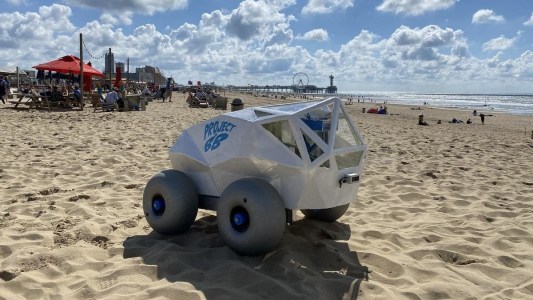 Robotics
This little robot is cleaning up beaches, one cigarette butt at a time
Subscribe to Freethink for more great stories
Subscription Center
Sections
Video
Freethink
Subscribe
We focus on solutions: the smartest people, the biggest ideas, and the most ground breaking technology shaping our future.
Subscribe