Endometriosis is a chronic pain disorder that affects an estimated 1 in 10 women around the world between the ages of 15 and 49. Yet, despite the disorder’s prevalence and often debilitating pain, women suffering from it tend to be either dismissed or offered a limited number of treatment options.

But a new study from researchers in Spain may change that. The research team has demonstrated, using a mouse model, that a moderate dose of THC could not only reduce pain associated with endometriosis, but could even be effective at reducing internal cysts associated with the disorder.

Not a Modern Medical Mystery

While discussions of endometriosis may have become more common in recent years, with women voicing their first-person accounts of the disorder, the disease itself is far from new. Descriptions of the disorder appeared in medical texts as far back as the late 1800s, and despite a better modern understanding of what causes endometriosis pain — the inflammation of tissue that has grown outside of the uterus on a woman’s ovaries, bowels, or pelvis — the cause of endometriosis itself is still unknown.

As for treating the disorder, women often face challenges from the start, not only because endometriosis symptoms present similarly to other disorders, like pelvic inflammatory disease, but also because endometriosis pain is often dismissed as merely menstrual pain. After diagnosis, treatment options for endometriosis range from over-the-counter pain relief, like ibuprofen, to hormone treatments to, in severe cases, hysterectomy.

In search of better options, a team of Spanish researchers turned to mice and the psychoactive component of marijuana — THC.

“With a lack of effective treatments, women with endometriosis usually rely on self-management strategies,” the study’s senior author Rafael Maldonado, Professor at the University Pompeu Fabra of Barcelona, Spain, said in a statement. “Although cannabis comes with a large number of potential side effects, its medicinal properties could provide pain relief in endometriosis and other conditions.”

The researchers implanted endometrial tissue around the pelvis of an experimental group of female mice, in order to mimic endometriosis symptoms, and left a control group of mice untouched. As with endometriosis in women, the afflicted female mice began to demonstrate pain and anxiety symptoms, as well as cognitive impairment and the development of endometrial cysts. Once these symptoms were established, both groups of mice were given daily 2mg doses of THC over a 28-day period.

The team found that the mice with endometriosis experienced decreased pain in their abdomens as a result of their THC doses, as well as lessened cognitive impairment. While this study certainly isn’t unique in connecting cannabinoids with pain relief, the team did find another surprising effect of the THC dosage: cyst inhibition. The researchers found that endometriosis mice had smaller endometrial growths after completing the THC regimen.

Swing and a Miss

Despite the promising results of the study, the researchers were still unable to determine THC’s effectiveness in several key areas of endometriosis, including anxiety, fertility, painful intercourse and extreme menstrual cramps. However, following this study the researchers have partnered with the Gynecology Service of the Hospital Clinic of Barcelona, Spain, to begin conducting clinical trials of this approach in women with endometriosis.

With any luck, positive results from this impending clinical trial could finally spell relief for the tens of thousands of women suffering from endometriosis.

Ed. Note: an earlier version of this draft incorrectly stated that endometriosis pain is caused when endometrial tissue grows outside of the uterus. It is actually caused by tissue that resembles endometrial tissue. We regret the error. 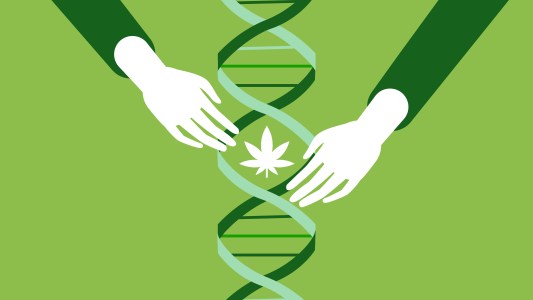