The new vaccine candidate, designed against avian or bird flu viruses, has already been given to healthy adult volunteers at the National Institutes of Health (NIH) Clinical Center in Bethesda, Maryland, the NIH announced.

Researchers have long sought a universal flu vaccine against the rapidly mutating virus — not only to cover our bases each flu season but also to potentially get ahead of the next pandemic flu strain.

“Influenza vaccines that can provide long-lasting protection against a wide range of seasonal influenza viruses as well as those with pandemic potential would be invaluable public health tools,” director of the National Institute of Allergy and Infectious Diseases (NIAID) and Chief Medical Advisor to the President Anthony Fauci said.

Moving targets: With covid variants of concern causing Greek letters to proliferate like Pledge Week, viruses’ ability to mutate and dodge our vaccines, antivirals, and immune systems is rightly top of mind.

But as fast as SARS-CoV-2 is evolving, it is pedestrian compared to more rapidly-mutating viruses like the headspinningly fast HIV and perennial public health scourge influenza.

This is why getting your flu shot is an annual affair. Currently, there is no single-shot, long lasting jab.

Each year, researchers must track flu strains like fashion week, spotting trends and putting forth their best educated guesses about what the vaccine should target. Get it right, and flu season is a manageable affair; get it wrong, and tens of thousands of people may die.

Once considered a bit quixotic, a universal flu vaccine has become the field’s biggest, shiniest brass ring, one jab to rule them all.

New flu vaccine targets, like the virus’s stalk and anchor, are more stable than the rapidly mutating head, offering broader and longer-lasting immunity.

“Influenza vaccines that can provide long-lasting protection against a wide range of seasonal influenza viruses as well as those with pandemic potential would be invaluable public health tools.”

The new trial: This latest phase 1 trial is designed to test the safety of the new vaccine, called BPL-1357, as well as its “immunogenicity” — its ability to spark the proper immune response.

The study is placebo controlled, with up to 100 volunteers, aged 18 to 55. Each volunteer will receive two doses of the vaccine or a placebo 28 days apart, either as an intramuscular shot or a nasal spray.

The volunteers will return to the clinic seven more times to give blood and mucus samples to measure their immune response — including mucosal immunity, which may be the key to preventing the spread of respiratory viruses by beefing up our defenses right at the front lines, in the nose.

“This is very different than nearly all other vaccines for influenza or other respiratory viruses, which focus on inducing immunity to a single viral antigen and often do not induce mucosal immunity.”

The study will also study how important mucosal immunity may be against flu, Memoli said.

The vaccine: BPL-1357 was developed by National Institute of Allergy and Infectious Diseases (NIAID) researchers. The vaccine is a “whole virus” vaccine, bundling together four strains of low-risk avian influenza viruses that have been killed, similar to how current flu shots are made.

The researchers chose their candidates based on what subtypes have caused the majority of human infections and which are considered prime pandemic threats, providing multiple targets to likely threats in a bid to “hopefully maximize development of broad protective immunity,” Taubenberger said.

In a previous animal trial, mice who received two doses of BPL-1357 either as a shot or a spray were protected from even lethal doses of six different influenza viruses.

That includes subtypes not covered specifically by the vaccine — suggesting that it is provoking strong cross-immunity. Another trial in ferrets — a better model for humans — had similar results, the NIH said.

In a previous animal trial, mice who received two doses of BPL-1357 either as a shot or a spray were protected from even lethal doses of six different influenza viruses, with similar results for ferrets, an even better model for humans.

While not designed to figure out if BPL-1357 is the universal flu vaccine experts have been hoping for, it’s another step in the right direction.

“The BPL-1357 candidate influenza vaccine being tested in this clinical trial performed very well in pre-clinical studies and we look forward to learning how it performs in people.” 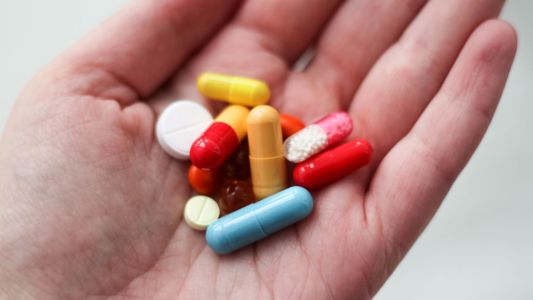 In order for a drug to get to the small intestine, it must first get past the highly acidic environment of the stomach.