A group of researchers in Spain have synthesized a CRISPR-Cas gene editing system from 2.6 billion years ago, a laboratory feat they describe as a “resurrection.”

The work, published in Nature Microbiology, represents not only a way to better understand how bacteria first evolved this powerful gene editing tool, but could perhaps also lead to better versions.

By studying ancient CRISPR sequences and recreating them in the lab, the team was able to create functional versions of the ancient Cas proteins capable of cutting DNA in the modern day.

”This research signifies an extraordinary advance in knowledge about the origin and evolution of CRISPR-Cas systems,” Francis Mojica, a University of Alicante researcher on the team, said.

Researchers have synthesized a CRISPR-Cas gene editing system from 2.6 billion years ago, a laboratory feat they describe as a “resurrection.”

Mojica, Ruud Jansen, and their colleagues at the Netherlands’ University of Utrecht were the first to discover that the mysterious CRISPR system in bacteria can work like genetic scissors, snipping out DNA.

Resurrecting ancient CRISPR systems has an applied use as well, Mojica said; the work may help to refine current CRISPR techniques and lead to ways to develop new ones.

As researchers scour Earth’s microbes for new CRISPR candidates, the Spanish team has plumbed their past.

What is CRISPR? For billions of years, an invisible war has raged between bacteria — among the simplest, best adapted, and most proficient forms of life — and the viruses, which are so simple they can hardly be described as alive at all.

Incapable of replicating on their own, viruses must hijack other organisms, like bacteria, to continue their existence. Little wonder, then, that bacteria had to develop ways to fight back.

Among them is CRISPR, a kind of an immune system that keeps DNA records of previous infections and then uses a protein called Cas to attack viruses that show up again. When Cas reaches a targeted virus, it cleaves the viral DNA, protecting the bacteria from infection.

Researchers have harnessed that targeted, DNA-snipping ability as a gene editing tool for all kinds of organisms. CRISPR can now be found in a variety of fields doing a variety of jobs, from helping to fight sickle cell and high cholesterol in humans to gene editing animals and crops. It’s proven to be an amazingly versatile tool.

Basically, we’re benefiting by raiding the arsenal of an ancient arms race.

But despite its wide-spread adaptation, CRISPR’s “origin and evolution are poorly understood,” the authors wrote in their study.

A link to the past: To try and better understand that origin and evolution, a team spearheaded by research professor Rául Pérez-Jiménez of CIC nanoGUNE sought to resurrect ancient Cas proteins in modern labs.

Pérez-Jiménez’s research group at nanoGUNE has spent years studying the evolution of proteins like Cas — reconstructing genes and proteins from extinct organisms to see if they can become modern biotech tools.

To analyze ancient CRISPR-Cas sequences, they turned to firmicutes — a type of bacteria — that went extinct billions of years ago.

Starting with various bacterial genomes known today, the scientists used computer modeling to work backwards towards their common ancestor, hopscotching their way back in time. The team reconstructed the ancestral CRISPR sequences, then synthesized them in the lab to study them and test if they worked — and found the ancient Cas proteins as sharp as their modern counterparts.

“What is surprising is that we can revitalize Cas proteins that must have existed billions of years ago and find that they already had the capacity then to operate as gene editing tools; we have now confirmed that by successfully editing genes in human cells,” said researcher Lluís Montoliu, who works at the Rare Diseases Networking Biomedical Research Center (CIBERER).

Link to the past in hand, the team was able to determine that CRISPR-Cas systems have become more complex over time, adapting to new viral threats — the arms race in action.

The work not only helps us understand the origins and evolution of the system, but opens the potential for new CRISPR systems as well.

These modern, complex CRISPR systems have evolved to be highly specialized to work inside bacteria, Pérez-Jiménez said. When it’s used to edit human cells, the immune system can reject it, and “molecular restrictions” limit its use.

“Oddly enough, in ancestral systems some of these restrictions disappear, which gives these systems greater versatility for new applications,” Pérez-Jiménez. Because the ancient Cas proteins are not as dialed in as modern options, they may be a more versatile option.

Resurrecting the ancient proteins “can make available gene editing tools with properties different from the current ones, and which are much more flexible,” nanoGUNE researcher Ylenia Jabalera said.

This could mean “new avenues in DNA manipulation and treatment of diseases such as ALS, cancer and diabetes, or even in diagnostic tools for diseases.” 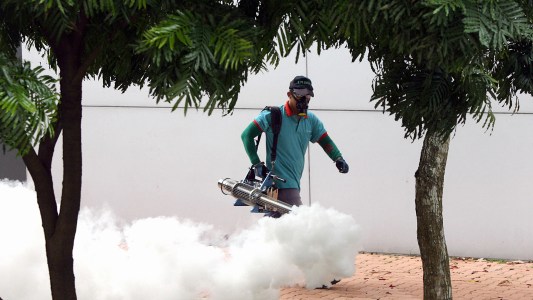 Public Health
Google sister company aims to eradicate dengue from a tropical country
By B. David Zarley
Subscribe to Freethink for more great stories
Subscription Center
Sections
Video
Freethink
Subscribe
We focus on solutions: the smartest people, the biggest ideas, and the most ground breaking technology shaping our future.
Subscribe