After graduation, Carnegie Mellon alums Brian Frezza and D. J. Kleinbaum decamped for the Left Coast and founded Emerald Therapeutics to work on antivirals — a notoriously difficult line of research.

But, they told Nature’s Carrie Arnold, they ended up struggling with their equipment more than running experiments.

To get their lab on track, they turned to a growing corpus of computer codes to run their machinery, and saw increases not only in efficiency but replicability, as well.

“I was turning experiments into code,” Frezza told Arnold. “At the end of the day, there’s no ambiguity in this text, I can push a button and reproduce it.”

Realizing that their method could benefit other scientists, they founded Emerald Cloud Lab and began offering remote robotic labor to researchers across the globe.

Academics, start-ups, and pharmaceutical companies are increasingly turning to cloud labs to automate, optimize, and democratize research, Arnold reported — imagine having a lab open 24/7, with highly trained assistants at your beck and call.

“This was the transformation that science needed, much like the cell phone, much like the self-driving car,” Rebecca Doerge, dean of the Mellon College of Science, told Arnold.

“The process of science hasn’t kept up with the technology.”

Ghosts and clouds: Cloud labs echo a revolutionary idea from the food industry, called “ghost kitchens” — distributed kitchens that rent out space, time, and staff to multiple restaurants to crank out food for local delivery. Co-packing, another similar, much more established concept, involves a larger/more able company manufacturing a startup’s products for them.

Cloud labs can provide individual researchers access to a huge suite of tools and experiment protocols, without having to raise the capital to build a whole lab themselves.

When then-Carnegie PhD student Dmytro Kolodieznyi was asked to replicate his research at Emerald Cloud Lab as part of an experiment, he found that he could replicate year’s worth of research in about a week — and that was only a taste of the lab’s capabilities, he told Arnold.

The trial run went so well that Carnegie Mellon is now developing its own cloud lab, slated to open in 2023, and Kolodieznyi would go on to work for ECL after acquiring his PhD.

Efficiency and reproducibility: Having access to a cloud lab is akin to “having a laboratory that is operating 24/7,” Germano Coppola, from Australian biotech CSL Behring, told Arnold; the company is an Emerald Cloud Lab client.

Researchers can code and send their experiments to cloud labs from, theoretically, anywhere — providing them access to equipment and experimental protocols they may not otherwise be able to use. And because the experiments are written out in code, they can be replicated more easily — you just plug the same code in.

“I cannot remember how many times I’ve read something in a paper, tried to do it and, not surprisingly, it didn’t work. But in a cloud lab, if I just copy and paste my experiment, it will work again,” Kolodieznyi said.

Democratizing research: Because anyone could use the equipment in a cloud lab, proponents believe it will help to democratize scientific research, granting access to advanced equipment and laboratory methods to researchers without the capital to do things in-house.

Some are concerned that lowering the barriers to entry could make it easier for bad actors to perform research towards malicious ends, however.

“Cloud labs may offer up endless possibilities for experimentation, but not all research will necessarily be for good purposes,” King’s College London’s Filippa Lentzos and biological arms control expert Cédric Invernizzi wrote in the Bulletin of the Atomic Scientists.

Bad actors could use cloud labs to perform gain-of-function experiments that may make bacteria and viruses more dangerous that they could perhaps have not had the capital or expertise to do otherwise, Lentzos and Invernizzi argue.

“While there may well be legitimate reasons to carry out these sorts of experiments, that legitimacy hinges on intent, and to evaluate intent, service providers would need to know what is going on in their workcells,” they wrote.

But a cloud lab could also mean high schoolers in an underserved school district can run real experiments — a program CMU hopes to begin when their lab opens in 2023. 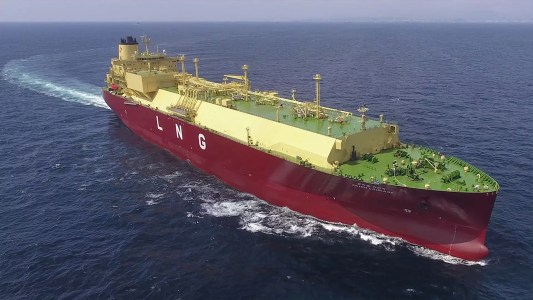 Autonomous ships like the Prism Courage could make the seas safer, while also making shipping cleaner and more efficient.

AI
Hyundai’s autonomous ship is the first to make a transoceanic journey
Subscribe to Freethink for more great stories
Subscription Center
Sections
Video
Freethink
Subscribe
We focus on solutions: the smartest people, the biggest ideas, and the most ground breaking technology shaping our future.
Subscribe