There are bacteria out there that make their home in one of the most common building materials on Earth — concrete. And while researchers have studied the interactions between microbes and concrete, they’ve mostly focused on the surface, the bacteria that arrive after the concrete has been poured.

University of Delaware researcher Julie Maresca has a deeper focus, however; she’s studying the bacteria which make their home inside the concrete, either hitching a ride with the ingredients — the gravel and sand — or leaching in over time.

“There is not a lot of life in concrete,” Maresca said.

But what life there is may be able to help us. As infrastructure around us crumbles, with thousands of bridges deemed at risk by the Federal Highway Administration, the bacteria inside concrete may be able to warn us of structural damage before we can see it.

And, armed with the right microbes, could perhaps even repair the concrete from inside.

“There was really nothing at all known about microbes in concrete,” Maresca said.

“But what’s in there and does it do anything? Can it tell us anything?”

A hard place to live: Bacteria are, like, really good at living in places you’d think they couldn’t — like lakes 19,000 feet below the South Pacific, or the outside of the International Space Station.

“Concrete is an extreme but common environment” for bacteria, Maresca and her team wrote in their study, published in mSystems. Hard, dry, and salty, concrete also has a very high pH level — about as inviting as a bottle of bleach, according to the researchers.

While their previous work determined that small numbers of bacteria do live inside concrete, for this new study, the team wanted to figure out how time and weather impact these communities.

Toughing it out: To find out, they poured concrete samples into 40 containers about the size of a one-liter pop bottle.

Three different types of concrete were used. One mix was common concrete, which can be damaged by a chemical reaction known as “concrete cancer.” This damage often goes undetected until we can see cracks on the concrete’s surface.

The second mix had an ingredient that helps prevent this degradation, while the third mix had sterile ingredients, to serve as their control.

The cylinders were placed on a roof, and DNA samples were collected every six months for two years. By analyzing the DNA, the team was able to learn more about the bacteria inside.

They discovered that the amount and diversity of bacteria ebbed and flowed — and that some bacteria came back strong depending on weather conditions.

“Microbes that survive and even thrive under these conditions can potentially either degrade concrete or contribute to its repair,” the researchers wrote.

One bacteria in particular, Bryobacter, seemed to be associated with concrete cancer, New Atlas reported. With more research, testing for the bacteria could potentially warn us before cracks even form.

“The earlier you can detect a problem, the more time you have to solve a problem before it becomes a real problem,” Maresca said. “And since we have all these roads and bridges at risk, we need a way to prioritize them. Which are in dire need and which aren’t?”

The bacteria inside concrete may be able to warn us of structural damage before we can see it, or even one day possibly repair it.

Bacteria can do more than warn us of damage — they can also help repair it.

This beneficial bacteria may only live for a few months, however; by studying which bacteria can hold tough in concrete, we may be able to find little construction crews that can work better.

Hitting the road: For their next study, the team will analyze the bacteria living in road and bridge samples taken from Delaware and New Jersey. (One imagines these Jersey bacteria will be extra tough).

“It’s the most commonly used building material in the world, but we just don’t know anything about what lives in there,” Maresca said. 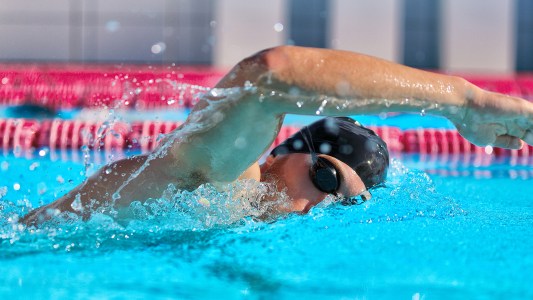