Can we control hurricanes — or stop them altogether?

The answer currently is, of course, no — right now, there’s no way for us to have any control over these powerful storms. (And blowing up storms with nuclear weapons is a really, really bad idea.)

But as scientists grow increasingly worried about the potential for these storms to turn deadlier thanks to climate change, scientists and entrepreneurs are working on ways to weaken hurricanes and save lives.

Why it matters: Hurricanes are the deadliest and most costly weather disasters in the U.S. — causing nearly 7,000 deaths and $100 billion dollars in damages since 1980.

And there’s evidence that these storms are becoming more powerful thanks to warming ocean temperatures.

A study published last year in Nature found that hurricanes today are lasting longer and staying more powerful over dryland when compared to hurricanes that made landfall in the 1960s.

Hurricanes are the deadliest and most costly weather disasters in the U.S.

A deadly trend: Warm air holds more water than cool air and when a hurricane is over the ocean, the warm water gives it strength — that’s why we see powerful storms form in the Caribbean and Gulf of Mexico.

Typically, storms weaken over land — but the authors of the Nature study say that warmer seawater from climate change is building up the storms’ endurance before they hit land.

“This is exactly the kind of thing we’re going to have to get used to as the planet warms,” Emanuel told the Washington Post.

That’s why geoengineering proposals to attack hurricanes first — once too sci-fi to even consider — are now being seriously studied.

Bubble curtain: Hurricanes form when the ocean water is around 80 degrees Fahrenheit. So, what if you could cool it?

A Norwegian company, OceanTherm, has proposed building a “bubble net,” stretched across the path of a storm, to cool the water and weaken hurricanes before they hit land.

The idea is simple: pump air through long, submerged pipes between ships. Bubbles will emerge from tiny holes in the pipes, which pushes the cooler deep ocean water to the surface. Stretching this bubbly net across the path of hurricanes could theoretically cut the legs out from under the gathering storms.

Bubble nets really exist — they’ve been deployed along the Norwegian coast since the 1960s to keep the fjords free of ice. (In this case, the bubbles push the warmer, saltier sea water to the surface, preventing the fresh surface water from freezing solid.)

And Californians have used bubble nets to “reduce the fish-killing sounds created by underwater construction projects, such as bridges spanning the San Francisco Bay,” Wired reports.

But deploying the nets on a massive scale in the deep ocean would be new. Right now, the idea is based entirely on computer simulations. According to Wired, the company is looking for U.S. investors to support an experimental project in warmer latitudes.

Bright clouds ahead: Stephen Salter, an emeritus professor of engineering design at the University of Edinburgh, thinks we can weaken hurricanes by spraying ocean water droplets into the atmosphere.

Increasing salt in the atmosphere makes clouds whiter, reflecting more sunlight into space — meaning, less sunlight will make it to sea level and the ocean waters will stay cooler. The salt particles would return to Earth in rain.

Salter thinks this could be done by using special unmanned, wind-powered ships that would traverse the world’s ocean, spraying salt into the atmosphere.

According to Popular Science, Salter isn’t aiming to get rid of storms. Rather, he’s aiming for “about a 3 percent temperature drop to reduce their intensity and frequency.”

A giant mixer: Salter isn’t short on ideas to weaken hurricanes. His first proposal was dubbed the “Salter Sink” — basically a large pump that stirs the ocean. It pushes warm surface-level water deep down where it can mix with the cooler water.

The device is a giant ring, made from tires twisted together. Plastic tubes extend from the ring to the deep ocean. As waves crash overtop the ring, the warm water is pushed down through the tubes.

The idea is that when the water returns to the surface, it will be cooler, which will weaken the hurricane. To really work, hundreds — or thousands — of these would need to be deployed in the deep ocean.

If any of these ideas were to actually be effective, they’d need to be proven at scale. And that is likely to cost billions of dollars.

The design was presented to the U.S. government in 2007, after Hurricane Katrina. Soon after, Salter co-patented the idea with Bill Gates. Intellectual Ventures, a Seattle-based new tech company, developed the device.

“The Salter Sink concept is delightfully simple and singularly gargantuan,” the company said in a statement posted on its website in 2012 . “It has captured our imagination here in the lab.” Unfortunately, the website said more field tests were needed to prove viability, but it’s unclear what progress has been made since then.

A similar device was made by the company Atmocean. However, instead of pushing water down, they’re interested in bringing cooler water up. According to Vox, the device was successful “but only under ideal wave, temperature, and geographic conditions.” The ocean is rarely so cooperative.

Cold water: Some scientists are skeptical that these geoengineering ideas could ever work. Mother nature is complicated, they say, and extremely hard to predict. Currently, scientists have a hard time even predicting where a storm will go once it’s formed — so, adding artificially brightened clouds and cooler waters to the mix could enhance that unpredictability.

What we know for sure is that if any of these ideas were to actually be effective, they’d need to be proven at scale. And building any of them is likely in the billions of dollars. With that price tag, some argue that the money would be better spent on equipping cities to be resilient against natural disasters, with levees, sea walls, and drainage systems. 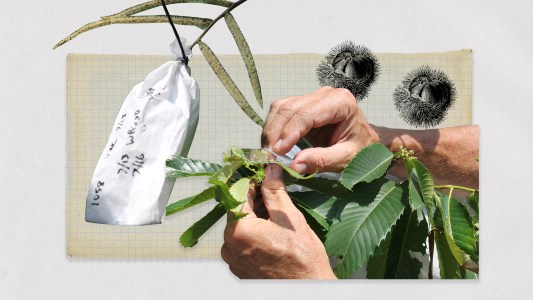 Researchers plant a small experimental orchard of hundreds of transgenic American chestnut trees near the coast of Maine, to restore the species.

Biology
The bold plan to bring back the American chestnut
By Teresa Carey
Subscribe to Freethink for more great stories
Subscription Center
Sections
Video
Freethink
Subscribe
We focus on solutions: the smartest people, the biggest ideas, and the most ground breaking technology shaping our future.
Subscribe